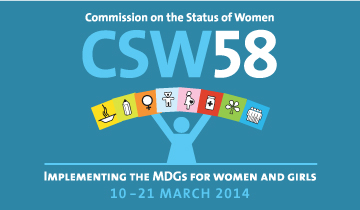 The Commission on the Status of Women held its 58th Session from March 10 to 21 at the UN Headquarters in New York, bringing together States and civil society organizations to discuss the priority theme of “challenges and achievements in the implementation of the Millennium Development Goals for women and girls.”  The discussion both centered on, and informed revisions to, the Agreed Conclusions adopted by the Commission on the Status of Women on the final day of the session.

Panelists and those that engaged in discussion expressed a desire to accelerate the realization of the Millennium Development over the next two years even as plans for a post-2015 development framework take shape. Speakers repeatedly stressed the importance of incorporating women’s rights and human rights, more generally, into the post-2015 framework. The Report of the Secretary General on Challenges and achievements in the implementation of the Millennium Development Goals for women and girls addresses many of the topics covered in the panel discussions.

Panel 1: Challenges and Achievements in Implementation of the MDGs

Opening the first panel discussion, Ms. Christine Löw reminded those listening that only a short time remains to implement the MDGs and emphasized the importance of integrating support for gender equality and the empowerment of women in post-2015 plans. She asked the members of the panel to address notable achievements in the implementation of the Millennium Development Goals (MDGs), remaining gaps and challenges to the achievement of the MDGs, strategies that can be used to accelerate implementation, and lessons learned from the MDGs.

According to the panelist, human rights standards and norms are essential to the achievement of the MDGs and post-2015 goals for sustainable development. Mr. Chrispine Gwalawala Sibande called upon the relevant stakeholders to use human rights as a “litmus test” for measuring the achievement MDGs.  Panelists referenced international human rights documents including the Beijing Declaration and Platform for Action and the International Covenant on Economic Social and Cultural Rights and discussed the importance of building on existing efforts achieve gender equality.

Panelists also shared positive outcomes of the MDGs, such as the substantial reduction of global poverty, but noted that these did not necessarily reflect an improvement in the life of women. As Ms. Ursula Schäfer-Preuss pointed out, approximately 70% of the world’s poor are women and girls. Learning from the successes and failures of the MDGs, panelists proposed altering the post-2015 framework to provide more gender conscious approach to sustainable development. Gaps in the MDGs, such as the failure to address violence against women, have limited their effectiveness for women and girls.

Other global concerns discussed by the panelist that disproportionately affect women and girls include employment and unpaid care work, access to credit, deficiencies in social protection, sexual and reproductive health, and political participation.

Panel 2: Accountability and Participation of Women and Girls

Despite the increase in the number of women in position of political leadership, the panelists argued that work still needed to be done to achieve gender equality within this sphere.  Ms. Salina Sanou noted that mere fact that women hold political positions does not guarantee the adequately representation of women’s issues.

Echoing the morning discussion, these panelists also emphasized the importance of a human rights based approach. The panelist addressed the need for a new framework that addresses gender equality, the rights of women, and the empowerment of women. Ms. Maarit Kohonen Sheriff proposed that the post-2015 framework should integrate international human rights to provide women with freedom from want, freedom from fear, equality and non-discrimination, and a healthy environment.

Addressing the importance of greater accountability for all stakeholders, the panelists expressed a need for transparency and cooperation. Ms. Carolyn Sobritchea suggested that the following measures are necessary for full accountability: the participation of women and girls in the implementing and monitoring of MDGs, a commitment to gender mainstreaming, and continuous legal and judicial reform.

Discussing the important role that men must play in the fight for gender equality, H.E. Mr. Urmas Paet referenced HeForShe, a new campaign launched by UN Women that calls on men to speak out against gender discrimination.

The Commission on the Status of Women outcome document, the Agreed Conclusions, was the subject of intense debate among participants. Many stakeholders welcomed the hard-fought agreement to pursue gender equality, the empowerment of women, and women and girls’ human rights as stand-alone goals in the articulation of future development goals. [Guardian]

The Commission on the Status of Women

The Commission on the Status of Women, a policy making body focused on gender equality and the advancement of women, is a functional commission of the Economic and Social Council (ECOSOC).  The CSW is tasked with monitoring and evaluating progress toward the achievement of the Beijing Declaration and Platform of Action, supporting gender mainstreaming within the UN, and identify emerging issues and trends affecting the situation of women.  Representatives of its 45 Member States, other UN entities, and ECOSOC-accredited non-governmental organizations may participate in the annual sessions.

The Commission’s next session will be held March 9 to 20, 2015 in New York and will focus on reviewing the implementation of the Beijing Declaration in the 20 years since its adoption.

UN Women provides a full list of the available webcasts from CSW 58.