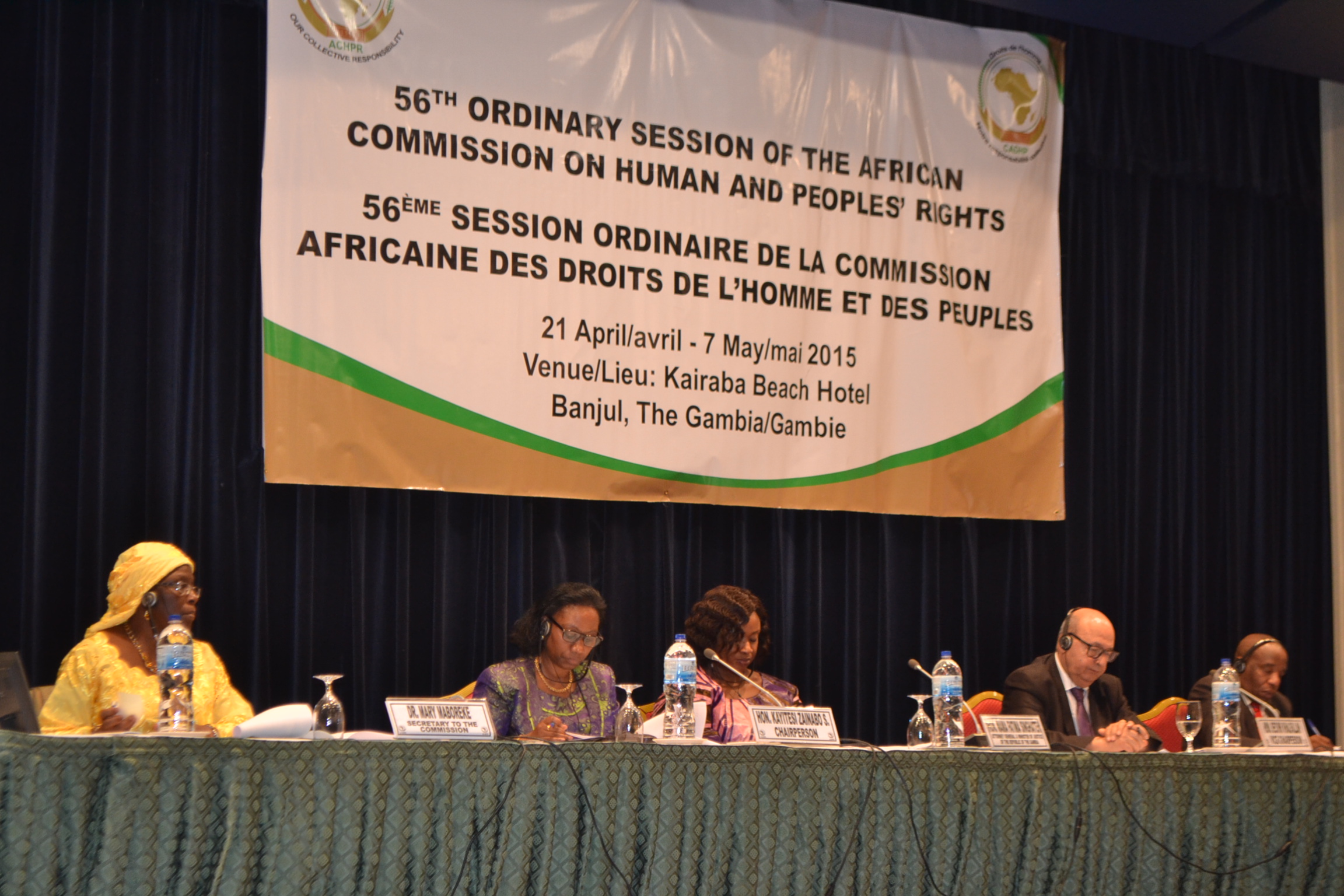 The 56th Ordinary Session of the ACHPR in Session

The ACHPR then goes on to urge State parties to put the Robben Island Guidelines (RIG) into practice. These guidelines provide extensive recommendations to State parties on measures for the prohibition and prevention of torture, including a section addressing the need to respond to the needs of victims. While the new resolution largely echoes the main points of the RIG, the latter prescribe more detailed policy recommendations. For example, the RIG call on State parties to make torture an extraditable offense; that is, an offense that would trigger one State to surrender an individual charged or convicted of torture to another State for prosecution or punishment. The RIG also exhort State parties to prohibit and prevent the use, production, or trade of any equipment or substance created for the purpose of inflicting torture or ill-treatment. In addressing the prevention of torture, the RIG call for the implementation of safeguards to ensure that the rights of those deprived of their liberty are guaranteed respect for their due process rights during the pre-trial process as well as their treatment while in detention.

Seventh, resolution 303 urges State parties to ratify and implement the UN Convention Against Torture (CAT) and its Optional Protocol (OPCAT), if they have not already done so.  Finally, the ACHPR expresses its intent to work with State parties and other actors to adopt national strategies to guarantee rehabilitation for victims of torture.

Civil society was very active in the process of drafting and presenting the resolution to the African Commission. Before the 56th Ordinary Session of the ACHPR, civil society organizations gathered in the Gambia for the NGO Forum to discuss human rights issues in Africa. Many of these organizations are members of the International Rehabilitation Council for Torture Victims (IRCT), an umbrella organization that advocates for preventing torture and supporting victims of torture worldwide. [African Commission Adopts Landmark Resolution on the Right to Rehabilitation for Victims of Torture]

At that time, six non-governmental organizations issued the recommended text for the resolution on the right to rehabilitation for victims of torture, which they presented to Commissioner Murugu Mute, Chairperson of the Committee for the Prevention of Torture in Africa. [African NGO Forum] The six organizations were: African Centre for Treatment and Rehabilitation of Torture Victims, Centre for the Study of Violence and Reconciliation (CSVR), Counselling Services Unit (CSU), Independent Medico-Legal Unit (IMLU), Kenya Human Rights Commission (KHRC), and the Prisoners Rehabilitation and Welfare Action (PRAWA).

After presenting their resolution to the Commissioner, NGO Forum participants enumerated some of the challenges surrounding torture prevention, prohibition, and rehabilitation policies. These challenges include: the difficulty of quantifying the needs of victims and the costs of rehabilitation; the challenges of providing access to vulnerable torture victims, particularly women who may not be able or willing to disclose the torture they have suffered; and the importance of including secondary victims as part of the rehabilitation process. [African NGO Forum].

For more information on torture, the African Commission for Human and People’s Rights, or the African human rights system, please visit the IJRC Online Resource Hub.