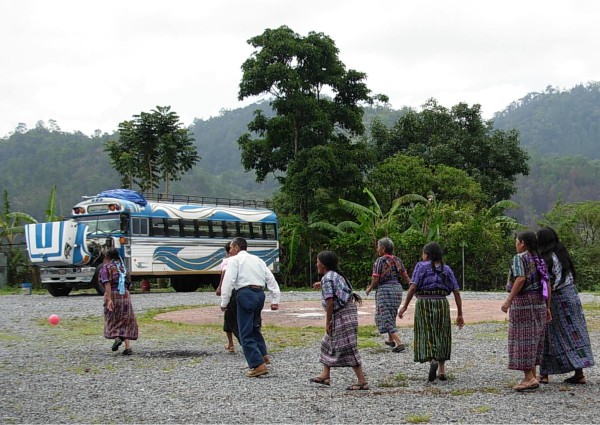 A landmark trial of former Guatemalan soldiers for crimes against humanity commenced this month before the country’s High Risk Court A (Tribunal de Mayor Riesgo A). In 2014, the State arrested and charged former Sepur Zarco base commander Lieutenant Colonel Esteelmer Reyes Giron and former  military commissioner Heriberto Valdez Asij with acts of sexual violence, sexual slavery, murder, and forced disappearances in connection with the kidnapping, rape, and enslavement of numerous indigenous women and killing of several men over a six-month period in 1982 to 1983, the height of Guatemala’s 36-year civil war. See Guatemala Human Rights Commission, Sepur Zarco Sexual Slavery Case.  The sexual assault survivors testifying in the trial are members of the Mayan Q’eqchi’ indigenous community. [NPR] The case is being hailed as historic because it is reportedly the first time a national court will oversee a prosecution for sexual slavery and because, although there were many victims of sexual violence during Guatemala’s armed conflict, this is the first prosecution of any perpetrator. [International Justice Monitor: Sepur Zarco; The Guardian]

The State has brought several charges against both defendants, based on a 2011 criminal complaint filed by survivors and a three-year investigation. See Guatemala Human Rights Commission, Sepur Zarco Sexual Slavery Case. Giron faces charges of crimes against humanity for alleged sexual violence, sexual slavery, and domestic slavery of 11 women; the murder of three women; and cruel treatment of two girls. Asij also faces charges for crimes against humanity by means of sexual violence against one woman and, in addition, faces charges for the forced disappearance of the husbands of six of the female survivors. See id.

In late 2015, the defense attorneys made several pre-trial motions that appeared intended to delay the proceedings.  Prior to the trial, Giron’s defense lawyer requested the recusal of the judges, and as a result, the High Risk Court A judges moved to excuse themselves from the case. [International Justice Monitor: Opening] The Supreme Court, however, denied the request, and the court not only continued with the proceedings but also moved up the start date of the trial by three months, denying other pre-trial motions that requested suspension of the proceedings. [International Justice Monitor: Opening]

Once the trial began earlier this month, the defense also objected to the use of recorded statements from the prosecution’s witnesses. Due to the delays, the age and frailty of the female survivors now in their 70’s and 80’s, and the trauma of re-telling their stories of abuse in open court, the survivors of sexual abuse had been permitted to record their testimonies in 2012 in pre-trail evidentiary hearings. [The Guardian] The defendants, however, raised an objection to the recorded evidence, claiming the manner of presentation of the evidence denied them the right to confront witnesses against them; the objection was denied on the grounds that the defense was able to confront the witnesses in preliminary hearings. [International Justice Monitor: Victim Witnesses]

History of the Armed Conflict

From 1960 to 1996, Guatemala’s military and paramilitary forces sought to suppress opposition from guerilla fighters and other leftists in an internal armed conflict, in which indigenous communities and other civilians were victims of widespread human rights abuses. [IJRC: Rios Montt] Some of the indigenous Mayan populations initially supported the guerillas in the hopes of remedying their marginalization. [Center for Justice and Accountability] The survivors in this case allege that the military targeted Sepur Zarco, a small town in eastern Guatemala, in response to the Mayan Q’eqchi’ leaders’ attempts to obtain legal title to the indigenous lands. See Guatemalan Human Rights Commission, Sepur Zarco Sexual Slavery Case.

During the 36-year armed conflict, approximately 250,000 people were killed or went missing, and nearly half of all violations that were reported occurred during the reign of Efraín Ríos Montt, who was initially convicted of genocide in 2013. [IJRC] During his short time in power, approximately 70,000 indigenous Mayans  were either killed or disappeared. [International Justice Monitor: Eighteen Months] In its report Guatemala: Memory of Silence, the Commission for Historical Clarification, a United Nations-mandated truth commission, attributed 93 percent of the atrocities to government forces. [Center for Justice and Accountability]

On December 29, 1996, the Guatemalan government reached a United Nations-facilitated agreement with the Guatemalan National Revolutionary Unity (URNG) to bring an official end to the armed conflict. The National Reconciliation Law “extinguish[ed] criminal liability for related common crimes committed in the armed conflict,” but did not absolve perpetrators of responsibility for “crimes which, under domestic law or the international treaties ratified or signed by Guatemala, are imprescriptible or are not subject to an extinction of criminal liability.” See UN General Assembly, The situation in Central America: Procedures for the establishment of a firm and lasting peace and progress in fashioning a region of peace, freedom, democracy and development, UN Doc. A/51/796 & S/1997/114, 29 December 1996, 20.

The Inter-American Court of Human Rights has repeatedly emphasized Guatemala’s responsibility to investigate and prosecute those responsible for human rights violations committed during the conflict, including massacres. [IJRC: Guatemala]

Importance of the Case

Although several cases relating to the armed conflict have been brought in various fora, this is the first time that Guatemalan prosecutors have brought a case of sexual violence arising from Guatemala’s civil war. The case also marks the first domestic hearing on sexual and domestic slavery tried as international crimes. [International Justice Monitor: Opening] The stigma attached to sexual violence often stands as a barrier to justice; many of the female victims attended the court while covering their faces in Mayan cloth to conceal their identities. [The Guardian] Two women’s rights groups, Mujeres Transformando el Mundo (Women Transforming the World), the Unión Nacional de Mujeres Guatemaltecas (National Union of Guatemalan Women) helped to build the case and to break the stigma associated with the crimes. [GHRC: Case Updates]

The High Risk Court A is the same court that, in 2013, found former Guatemalan dictator, Ríos Montt, guilty of genocide and crimes against humanity and sentenced him to 80 years in prison. However, the verdict was controversially overturned a mere 10 days later. [The Guardian] Most recently, Ríos Montt’s scheduled retrial was again suspended in January 2016. [Reuters]

For more information on international humanitarian law, international criminal law, and women’s rights or for prior news posts on judicial proceedings in the aftermath of the Guatemalan civil war, visit IJRC’s Online Resource Hub.