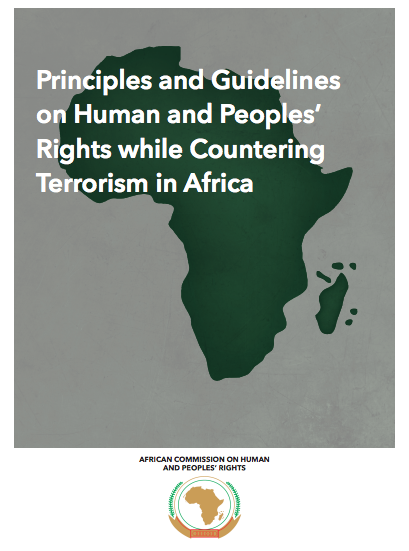 The African Commission on Human and Peoples’ Rights (ACHPR) has released new principles intended to guide its Member States in implementing counter-terrorism and security measures that comply with regional and international human rights norms. As African States increasingly face real and practical challenges posed by terrorism, the Principles and Guidelines on Human and Peoples’ Rights while Countering Terrorism in Africa (Principles and Guidelines) aim to explicitly define governments’ human rights obligations in this context and encourage States respond to security threats in ways that: prioritize victims’ needs, address the root causes of extremism, recognize the need to regulate modern developments including the use of private contractors and rendition, and include a commitment to implementing their human rights obligations. [ACHPR Press Release] Although the ACHPR adopted the Principles and Guidelines in May 2015, they were officially released on January 29, 2016.

With reference to a wide range of regional and universal human rights standards, reports, and decisions, the Principles and Guidelines identify a number of overarching principles and then explain specific obligations or sub-rights pertaining to particular human rights concerns. The 14 overarching principles emphasize governments’ obligations to prevent terrorism, ensure accountability, prove effective remedies, prohibit discrimination, safeguard judicial independence, and adhere to their human rights commitments while acting extraterritorially, among other duties. See Principles and Guidelines at 12-15.

The text then elaborates on the details of governments’ human rights obligations in specific counter-terrorism contexts, including the use of force, detention, prosecutions, transfers, international cooperation, the use of private security contractors, and human (public) security. The Principles and Guidelines also explain States’ duties with regard to stateless persons, human rights defenders and other civil society actors, privacy, and access to information.

Some parts of the Principles and Guidelines address core human rights, paying particular attention to the types of violations most common in a counter-terrorism setting. For example, in the section dedicated to the right to fair trial, the ACHPR identifies core human rights and legal principles by theme, including the components of a fair trial, the use of military or special courts, constraints on the collection and use of evidence, and the prohibition on double jeopardy. See id. at 24-25.

Other parts of the text deal with types of situations, such as “transfers of individuals” or “criminalization and sanctioning of terrorism,” and identify the specific duties and principles that should guide States’ policies and practices. See id. at 26-29. With regard to transfers, the Principles and Guidelines state that governments may not transfer individuals to another State’s custody unless the action “is prescribed by law and in accordance with due process and other international human rights obligations,” subject to judicial oversight, and in compliance with the principle of non-refoulement. See id. at 26.

With regard to government and civil society actors that may be dedicated to monitoring or exposing human rights violations, the ACHPR instructs States to “allow the establishment and improvement of” national human rights institutions; protect civilians, members of the judiciary and law enforcement, journalists, human rights defenders, and others from violence or intimidation – whether from the State or private actors; and to ensure victims’ access to justice, including by authorizing the formation of associations or organizations to represent them. Id. at 34-35.

Following each statement concerning a particular duty or right, the ACHPR has identified the supporting norms or decisions, which often include sources from outside the African system. For example, in support of the assertion that counter-terrorism initiatives must be designed to be as targeted as possible and carried out in a way that minimizes the use of force, the Principles and Guidelines cite to a landmark European Court of Human Rights judgment, as well as to the United Nations Basic Principles on the Use of Force and Firearms by Law Enforcement Officials and one of the ACHPR’s own decisions. See id. at 17-18. In other instances, the ACHPR cites to sources that are neither human rights instruments nor judgments, including references to factsheets produced by the Office of the High Commissioner for Human Rights and reports by special procedures of the UN Human Rights Council. See, e.g., id. at 26, 27.

To address emerging problems or trends, the Principles and Guidelines lay out both specific and general standards applicable to several modern counter-terrorism tactics, including targeted killings, the creation of statelessness, use of private security contractors, and extraordinary rendition. [ACHPR Press Release]

The final objective of the Principles and Guidelines is to underline the importance of cooperation and implementation, and, therefore, the Principles and Guidelines prioritize mutually reinforcing counter-terrorism measures that respect a human rights framework and recognize those efforts will only be successful through coordinated commitment and action by African Member States. [ACHPR Press Release]

To aid in a cohesive understanding of the connection between African Union Member States’ human rights commitments and counter-terrorism measures, the Principles and Guidelines offer “Explanatory Notes”, which identify preexisting human rights documents as the source and support for each principle and guideline.

The Principles and Guidelines come amidst increasing terrorist and violent extremist activity in many regions of the continent and follow a wave of grave acts of terrorism including the attack on Garissa University in Kenya, leaving 147 dead in 2015; the attack on the Westgate mall in Kenya leaving 67 dead in 2013; and the 2015 massacre in Baga, Nigeria, in which 2000 people were killed [BBC; Guardian: Kenya; Guardian: Nigeria]

The Principles and Guidelines developed from an ACHPR Resolution adopted in 2014 and are based on articles 1 and 23 of the African Charter on Human and Peoples’ Rights, which guarantee the security of peoples and their protection by States parties, and on Article 45(1) (b) of the African Charter, which mandates the Commission to formulate principles and rules to guide African States’ legislation. See ACHPR, Resolution 274: Resolution on the Drafting of Guidelines on Human Rights and the fight against Terrorism (adopted between 28 April and 12 May 2014).

To learn more about the African human rights system and recent developments in security and rule of law, visit the IJRC Online Resource Hub.