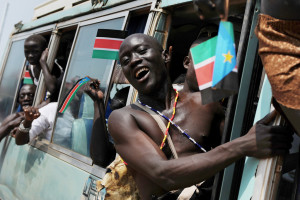 On March 9, 2016 the East African Legislative Assembly, the legislative arm of the East African Community (EAC), congratulated South Sudan on its admission into the economic community after passing a resolution to admit the State into the EAC. [EAC Press Release] In order to be accepted as the sixth Member State, South Sudan had to demonstrate its conformity to the EAC’s membership criteria and engage in negotiations with the other five members: Kenya, Tanzania, Burundi, Rwanda, and Uganda. See Treaty for the Establishment of the East African Community, art. 3(3).

Membership in the Community also brings South Sudan within the jurisdiction of the East African Court of Justice (EACJ). See Treaty for the Establishment of the East African Community (EAC Treaty), art. 27. While the EACJ is not explicitly mandated to hear human rights complaints, the EAC Treaty, which the court enforces, details the Community’s core principles of good governance, rule of law, and commitment to universally-recognized human rights; these provisions have provided a basis for legal claims regarding human rights violations, which could now be brought against the South Sudanese government once it accedes to the EAC Treaty. See Id. at art. 6(d) and 7(2).

South Sudan applied for admission to the EAC in 2011, shortly after gaining independence from Sudan. [Daily Monitor] The EAC Treaty lays out six factors to be considered when deciding to admit a new Member State: acceptance of the Community as established in the EAC Treaty; potential to strengthen regional integration; proximity to other Member States and interdependence with them; existence of a market driven economy; compatibility of social and economic policies with the EAC’s policies; and “adherence to universally acceptable principles of good governance, democracy, the rule of law, observance of human rights and social justice.” See Treaty for the Establishment of the East African Community, art. 3(3).

The EAC sent a mission in July 2012 to observe compliance with the factors considered for admission; additional negotiations between the Member States and the EAC went on throughout 2015. [EAC Press Release] The decision to admit South Sudan as a Member State is a change in tactic. The EAC had originally contemplated only granting observer status to South Sudan until the State could meet the criteria under the EAC Treaty, particularly regarding the tenet of good governance. [The East African]  Members of the East African Legislative Assembly cited the potential to promote economic development in the region through the State’s wealth of resources as a positive reason to admit South Sudan to the EAC. [EAC Press Release] Among South Sudan’s resources is an abundance of oil. [The East African]

As a member of the EAC, South Sudan will be required to accede to the EAC Treaty, and once it does so, the State will be subject to the jurisdiction of the EACJ. See Treaty for the Establishment of the East African Community, art. 27. The EACJ is empowered to interpret and apply the EAC Treaty, including determining whether a Partner State has failed to fulfill an obligation under the treaty. Id. at arts. 27-30. While the EACJ currently lacks explicit human rights jurisdiction, the court has addressed human rights violations in several cases that allege violations of the obligation to adhere to principles of good governance, democracy, rule of law, and human rights under, primarily, articles 6(d) and 7(2) of the EAC Treaty. See Treaty for the Establishment of the East African Community, arts. 3(3)(b), 6(d), 7(2), and 123(3)(c); see also, e.g., East African Court of Justice, James Katabazi v. Secretary General of the EAC, First Instance Division, Ref. No. 1 of 2007, Judgment of 20 November 2007 (finding, in an unlawful arrest and detention case, that human rights violations could be considered under the principle of rule of law even though human rights jurisdiction per se does not exist). Additionally, as the EACJ held in a past case, because Article 6(d) states that the “recognition, promotion and protection of human and peoples’ rights in accordance with the provisions of the African Charter on Human and Peoples’ Rights” is a fundamental principle of the EAC, the EACJ may consider whether a State acted in accord with the African Charter. See East African Court of Justice, Plaxeda Rugumba v. Secretary General of the EAC and Attorney General of Rwanda, First Instance Division, Ref. No. 8 of 2010, Judgment of 1 December 2011, para. 37.

The potential for human rights jurisdiction through the EAC is particularly relevant because of South Sudan’s limited ratification of other human rights treaties. It has accepted the complaints mechanism of only one human rights monitoring body.

On March 10, 2016 the Office of the United Nations High Commissioner for Human Rights released a report on the human rights situation in South Sudan, based on an assessment mission in the aftermath of an outbreak of violence in December 2013. The report revealed patterns of serious and systemic violence, including rapes, killings, and pillaging. Accounts of enforced disappearance, arbitrary and unlawful detention, and silencing journalists and civil society organizations are also rampant. [OHCHR Press Release]