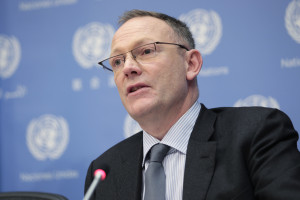 Before the United Nations Human Rights Council on March 15, 2016, the UN Special Rapporteur on the protection and promotion of human rights while countering terrorism, Ben Emmerson, presented his report focused on violent extremism and the human rights implications of measures taken to eradicate it. See Report of the Special Rapporteur on the promotion and protection of human rights and fundamental freedoms while countering terrorism, UN Doc. A/HRC/31/65, 22 February 2016. The report comes partly in response to the January 2016 release of the UN Secretary-General’s Plan of Action of Preventing Violent Extremism, which outlined a comprehensive strategy encompassing both security-based counter-terrorism initiatives and those aimed at addressing the underlying conditions which prompt individuals to turn to extremism. [UN Press Release: Plan of Action]

The Special Rapporteur highlighted in his report that there remains a lack of a consensus on the definition of violent extremism and that the term is often used interchangeably with the term terrorism. The report asserts that this fails to acknowledge the differences between the two concepts and the result is that violent extremism is primarily addressed only in the context of combatting terrorism. Id. at paras. 11, 13.

The report also states that many counterterrorism programs are founded on the simplistic notion that the process by which individuals turn to extremism and terrorist acts is often the same and follows a straight trajectory with clearly identifiable markers. The UN Expert says this leads States to focus on those influencing factors that appeal to them as opposed to some more complex, political issues such as foreign policy. The Special Rapporteur argues that a stronger understanding is that the path to radicalisation is particularized, with a range of local, national, and supranational factors but no single determining features that lead an individual to adopt extremist ideologies that potentially lead to acts of terrorism. Id. at para. 15.

Additionally, the report expressed concern for the inadequate approach taken to address violent extremism within the UN even where it was viewed as separate from terrorism. The Security Council’s Resolution 2178, a 2014 resolution that discusses threats posed by foreign terrorists, included a section on countering extremism but failed to include an adequate definition of violent extremism, which could provide room for States to create a vaguely defined offense of violent extremism to target and discriminate against human rights defenders, political opposition groups, and civil society. Id. at paras. 18, 20, 21. The Special Rapporteur drew on previous warnings from the Human Rights Committee that an offense of violent extremism must be clearly defined to avoid suppression of the exercise of the right to freedom of expression. Id. at para. 21.

The UN Secretary General’s Plan of Action on Preventing Violent Extremism, presented to the General Assembly in late 2015, also lacked a clear definition of violent extremism. While the Special Rapporteur agreed with the Secretary General’s approach to take a human rights centered approach to preventing violent extremism, the report “warns against the use of new terminology that, conceptually, has the same shortcomings as the term terrorism.” Id. at paras. 33, 35. The report reiterated the dangers to human rights posed by the absence of a clear definition of the term and said without a clear definition, “the use of the term as a basis for the adoption of new strategies, measures and legislation may prove even more dangerous for human rights than the term terrorism.” Id. at para. 35.

Impact of Measures Countering Violent Extremism on Freedom of Expression

The report recognizes the challenges posed by the “grey zone of expression” wherein groups spread offensive messages that are condemnable but do not constitute incitement, and reiterates that the freedom of expression must not be criminalized in the pursuit of countering and preventing extremism. The Special Rapporteur also notes that in the increased criminalization of speech that “glorifies” terrorism, the criminalization of the speech is based on the content rather than the intent or impact of the speech, thus constituting a repression of free speech. Id. at paras. 38-39.

Also recognizing the important role the internet has played in recruitment and radicalization, the report expounds on the importance of upholding and respecting international legal standards and the freedom of expression in States’ implementation of legislative measures to monitor communications online. In endeavoring to delete, block, or ban material, State’s must ensure proper legal recourse is available for those impacted and must ensure these actions comply with State party obligations to respect the privacy and security of digital communications in upholding Article 17 of the International Covenant on Civil and Political Rights (ICCPR). Id. at paras. 40-41.

Impact of Measures Countering Violent Extremism on Freedom of Movement

The report describes the national legislation that limits individuals’ freedom of movement in the name of countering violent extremism. Many States are considering enacting measures that would prohibit individuals from returning to a country where they have the right to reside, relocate individuals within their countries of residence, or amend citizenship and asylum requirements. Id. at para. 41. The report reiterates that such legislative actions must comply with and respect international human rights law, including as regards the rights to due process, family life, privacy, protection from arbitrary deprivation of nationality, liberty and security, as well as legal standards that apply to the situation of refugees, and more. Id. at para. 41.

The report points out that measures targeting specific individuals or groups deemed “at risk” of radicalization could result in discrimination and stigmatization of various minority, ethnic, religious, or indigenous groups. In order to be effective and trusted by the individuals and communities to which the measures apply, the Special Rapporteur states that programs must be based on factual evidence not assumptions or misconceptions. In order for communities to be motivated to engage with such programs, he highlights the necessity of avoiding stigmatization. Id. at para. 43.

The Special Rapporteur also warns against States adopting legislation which requires public sector actors such as teachers and health care providers to serve as watchdogs or intelligence officers, as this could have huge implications on such rights as those to confidentiality, education, academic freedom, and freedom of expression, thought, religion or belief. Id. at para. 46.

The report recognizes that often developments in national and international efforts fail to adequately recognize the particularized impacts of terrorism and violent extremism on women. The Special Rapporteur then expounds upon developments by UN bodies to implement a stronger gender dimension in counter terrorism and counter extremism measures. The Special Rapporteur asserts that women’s rights and gender equality must not become secondary to nor instrumentalized to advance a counter terrorism agenda. Id. at paras. 52-53.

The Special Rapporteur concludes his report by reiterating that while there is much promise in a focus on addressing conditions conducive to the spread of violent extremism, the lack of clarity in what constitutes violent extremism remains an obstacle to the effectiveness of measures to combat it.

In going forward, the report offers a series of recommendations calling for: more research on the phenomenon of violent extremism and more transparency in counterterrorism strategies; for States to implement measures to tackle the conditions that may be conducive to terrorism and measures to ensure respect for human rights for all and the rule of law as the fundamental basis of the fight against terrorism; that all strategies and policies adopted by States to counter violent extremism be firmly grounded in and comply with international human rights law; and that States avoid the securitization of human rights, international development, humanitarian assistance, education, community integration, gender or any other agenda. Id. at paras. 16, 56.

For more information on the right to freedom of expression; related articles on counterterrorism; or other UN Special Procedures, visit IJRC’s Online Resource Hub.