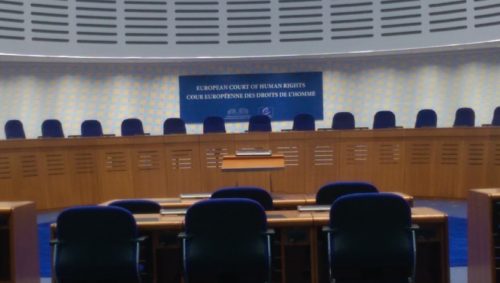 The Grand Chamber of the European Court of Human Rights (ECtHR) held on January 17 that a United Kingdom prisoner’s “whole life” sentence does not violate Article 3 (the prohibition of inhuman or degrading treatment) of the European Convention on Human Rights (ECHR) where the Secretary of State’s discretion to reduce the sentence is bound by domestic law that recognizes the binding nature of the ECHR and ECtHR jurisprudence. See ECtHR, Hutchinson v. the United Kingdom [GC], no. 57592/08, Judgment of 17 January 2017, para. 72. The decision contrasts with a prior Grand Chamber judgment in which the Court found a violation of Article 3 because, the Court found, the United Kingdom’s law offered no possibility of review or release for life sentences except in very limited circumstances. See ECtHR, Vinter and Others v. the United Kingdom [GC], nos. 66069/09, 130/10, and 3896/10, ECHR 2013, Judgment of 9 July 2013, para. 130.

The change in jurisprudence is attributable to domestic courts’ clarification of the law, which the Grand Chamber now views as compliant with the ECHR because it meets the relevant standards for the possibility of release and review. See Hutchinson v. the United Kingdom, Judgment of 17 January 2017, para. 70. Specifically, U.K. law allows the Secretary of State to reduce a life sentence at any time on compassionate grounds, which, the State claims, encompass more than end-of-life situations and will be interpreted in line with the ECHR. See id. at paras. 15, 56. A dissenting opinion criticized the Grand Chamber for “backtracking” on Vinter and Others.

The applicant was convicted in 1984 of murder, rape, and aggravated burglary. See id. at para. 10. He was originally sentenced to life in prison with a recommended minimum term of 18 years served. See id. at para. 11. In 1994, the Secretary of State imposed a “whole life” term, which eliminates any possibility of release on parole. See id. The High Court upheld this decision in view of the nature of the applicant’s crimes, and his subsequent appeal was dismissed. See id. at para. 12.

Analysis of the Grand Chamber

The Grand Chamber began by reiterating the standard for life sentences under the ECHR. The Convention allows life sentences for those convicted of particularly serious crimes, provided that such sentences allow for both the “prospect of release” and the “possibility of review.” See id. at para. 42. In its past jurisprudence, the Grand Chamber has held that to meet this standard the conditions and criteria for the assessment of release must be clear and be based on determining “whether there are legitimate penological grounds for the continuing incarceration of the prisoner,” including rehabilitation, in particular, as well as deterrence, public protection, and punishment. Early release may not be limited to compassionate grounds such as ill-health. See id. at paras. 42-44.

In a prior Grand Chamber case, the Court found that laws in the United Kingdom were inconsistent and unclear concerning the prospect of release and did not provide for a parole mechanism for life prisoners, and thus not in conformity with the Convention. See Vinter and Others v. the United Kingdom, Judgment of 9 July 2013, paras. 122, 129–30. In particular, the Court noted inconsistencies between a national statute and an official published policy manual. See id. at paras. 125–26. The statute was interpreted as consistent with the Convention because it imposed a duty on the Secretary of State to release a whole life prisoner where a continuation of their detention would be incompatible with Article 3 standards. See id. at para. 125. An appellate court decision affirmed this reading of the statute. See id.

The published policy manual, however, which provided guidance as to the law’s implementation, was much more restrictive; the Secretary of State, according to the manual, would only release a prisoner with a whole life sentence on compassionate grounds, such as ill-health. See id. at paras. 126–27. Due to this discrepancy and the reality of the implementation of the law, the Court determined that prisoners serving life sentences were not sufficiently afforded the possibility of release or review. See id. at paras. 127, 130.

Domestic courts have since resolved this conflict, ruling in 2014 that the power of the Secretary of State to release whole life prisoners is to be exercised in a manner consistent with the ECHR as established under the national statute, the Human Rights Act, regardless of any actual or perceived restrictions contained in published policies. See Hutchinson v. the United Kingdom, Judgment of 17 January 2017, paras. 17–19. The policy manual, the domestic appellate court held, should be read in light of Article 3, and therefore, compassionate grounds – the basis for the Secretary of State’s review and release of whole life prisoners – should be read broadly. See id. at 19.

The Grand Chamber, acknowledging the national courts’ resolution of the discrepancy, turned to a substantive analysis of domestic law. The Grand Chamber acknowledged the State’s argument that the Secretary of State’s discretion in reviewing cases is governed by a provision in the Human Rights Act, bringing review of sentences in compliance with the ECHR. The act requires the Secretary to comply with the ECHR and all relevant ECtHR cases in making decisions related to life sentences. See id. at para. 51. Additionally, the Secretary must provide the reasoning behind each decision, and decisions are subject to further review by domestic courts, which are also bound by the ECHR. See id. at paras. 51-52. Given the wide “margin of appreciation” States have in conducting sentence reviews, the Court took no issue with the review process having an executive rather than judicial nature. See id. at para. 45.

Importantly, the Grand Chamber approved of the domestic courts’ assertion that the “exceptional circumstances” under which whole life prisoners can be released cannot be limited to end-of-life situations, but must extend to all “compassionate grounds,” a term that will be, the U.K. stated, interpreted broadly in accordance with Article 3 of the ECHR and the U.K.’s Human Rights Act. See id. at para. 55. The Court was satisfied that the factors to be considered during life sentence reviews – including the prisoner’s progress toward rehabilitation and whether or not the sentence is still justified – adhere to the ECHR. See id. at para. 57.

The Grand Chamber also found whole life prisoners to be sufficiently on notice as to what criteria must be met in order for their release to be considered, as these decisions are based on, according to the Grand Chamber, readily available domestic law and relevant ECtHR cases. See id. at paras. 63–64.

With respect to the timing of such reviews, the Grand Chamber was satisfied that, according to law, the release of a whole life prisoner may be ordered “at any time.” See id. at para. 69. The Grand Chamber noted that this language could in fact be construed as favorable to prisoners, who need not wait a certain amount of time before being considered for release. See id. at paras. 67, 69.

In conclusion, the Grand Chamber found the United Kingdom’s life sentencing regime to be compatible with the ECHR. See id. at paras. 70–72. Thus, in imposing a whole life term on the applicant, the Secretary of State had operated properly within the bounds of a valid system and the applicant’s rights were not violated. See id.

Judge Pinto de Albuquerque’s dissenting opinion criticized the Grand Chamber for accepting the United Kingdom’s appellate court’s vague standard. While the appellate court stated that review of whole life prisoners’ continued detention will be conducted in line with Article 3 of the ECHR, Judge Pinto de Albuquerque noted, the court did not specify what criteria will be used and how much weight each would be given. See Hutchinson v. United Kingdom, [GC], no. 57592/08, Dissenting Opinion of 17 January 2017, para. 31. He noted that the State could not provide examples of the review procedure being carried out in compliance with the ECHR. See id. at para. 32. The dissenting opinion went further to point out that remarks from U.K. judges since the appellate decision indicate that they do not share the appellate court’s view that the standards in the manual should be read broadly so as to be in compliance with Article 3 of the ECHR. See id. The appellate court’s decision, the dissenting opinion opines, is inaccessible to the public as the Grand Chamber admitted in its own majority opinion. See id. at para. 33.

In particular, Judge Pinto de Albuquerque criticized the majority opinion for resting on the assumption that the Secretary of State will adhere to the appellate court’s interpretation; in his words, the Grand Chamber is pretending “that a future clarification of the law is capable of remedying its present lack of clarity and certainty and thus the violation that exists today.” See id. at paras. 33-34. He also views this stance as the Grand Chamber “backtracking from Vinter and Others” because, in finding that a future clarification based on the Human Rights Act is sufficient, the majority opinion is essentially saying the law in the U.K. was already in compliance with the Convention when Vinter was decided. See id. at paras. 35-38. Judge Pinto de Albuquerque warns that this corrodes the European Court’s authority in the region, allowing States to disregard certain ECtHR decisions, which, he states, will likely particularly affect minorities. See id. at para. 36.

Past ECtHR Jurisprudence on Life Sentences

This decision may be seen to modify the Court’s prior jurisprudence regarding life sentences, which has been one of the most politically controversial issues it has tackled, particularly in Great Britain. [Guardian] Though the Court has repeatedly stated that life sentences are not in themselves violations of the ECHR, such sentences must be reducible in practice and under the law in order to be in compliance with Article 3. See, e.g., ECtHR, Murray v. the Netherlands [GC], no. 10511/10, ECHR 2016, Judgment of 26 April 2016, para. 99. Determining the existence of reducibility goes beyond the reading of relevant law and includes an assessment of whether or not whole life prisoners can realistically expect to access and potentially succeed in the review process. See id. at para. 100.

In prior cases, the Court has been critical of reducibility that is reflected in law, but rarely borne out in practice. For example, the Court has previously held that failure to provide psychiatric treatment to a prisoner, thus precluding any meaningful opportunity for release, rendered his life sentence irreducible. See id. at para. 127. In another case, the Court found a life sentence to be irreducible due to the State’s failure to adequately inform prisoners of the requirements for release or consider their progress toward rehabilitation during reviews. See ECtHR, Magyar v. Hungary, no. 73593/10, Judgment of 20 May 2014, para. 58.

For a summary of the European Court’s jurisprudence on life imprisonment, see its factsheet.