ACERWC: Mauritania Failed to Protect Against and Punish Child Labor 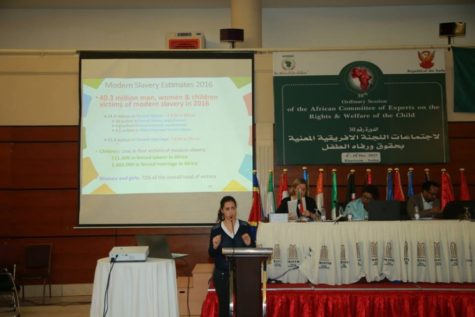 The African Committee of Experts on the Rights and Welfare of the Child’s 30th Ordinary Session
Credit: ACERWC

The African Committee of Experts on the Rights and Welfare of the Child (ACERWC) recently published its holding that Mauritania violated the rights to protection from child labor and from child abuse, among other rights and obligations, established in the African Charter on the Rights and Welfare of the Child (African Children’s Charter), due to the enslavement of two children. Two non-governmental organizations – Minority Rights Group International and SOS-Enclaves – submitted the complaint against Mauritania on behalf of two brothers, Said Ouid Salem, born in 2000, and Yarg Ould Salem, born in 2003, who alleged that they were victims of child slavery for 11 years. The Committee found that Mauritania failed to protect the applicants from slavery; to investigate, punish, and prosecute all the perpetrators responsible; and to provide a timely and adequate remedy for the applicants. Based in part on those findings, the ACERWC ultimately held that Mauritania violated its obligations under Article 1 (obligation to realize the rights in the Charter), Article 3 (right to non-discrimination), Article 4 (best interest of the child), Article 5 (obligation to ensure the survival and development), Article 11 (right to education), Article 12 (right to leisure, recreation, and cultural activities), Article 15 (right to protection from child labor), Article 16 (right to protection against child abuse and torture), and Article 21 (right to protection against harmful social and cultural practices) of the African Charter on the Rights and Welfare of the Child. See ACERWC, Decision on the Communication Submitted by Minority Rights Group International and SOS-Enclaves on Behalf of Said Ould Salem and Yarg Ould Salem against the Government of the Republic of Mauritania, Communication No.003/Com/003/2015, Merits Decisions, 30th Ordinary Session (2017), para. 97.

Facts of the Case

The two brothers, Said Ouid Salem and Yarg Ould Salem, were born to a mother who is part of the Haratine ethnic group in Mauritania, which has historically been enslaved in the State. See id. at para. 5. The brothers were made slaves in the El Hassine household. See id. They worked seven days per week, with no time off, and each were assigned daily responsibilities. See id. at paras. 6-7. They had no time for recreational activities, were deprived of an education, addressed as slaves instead of their names, only entitled to eat leftovers, and regularly subject to corporal punishment. See id. at para. 7.

After escaping the El Hassine household in April 2011, Said, the elder brother, went to the police accompanied by his aunt to file a complaint against household members for holding children as slaves, or for failing to denounce it. See id. at paras. 8-11. Charges were pursued against the two individuals in the household who were considered the slave owners for practicing slavery and depriving children of an education, and against the El Hassine brothers for being aware of the practice of slavery but failing to denounce it. See id. at para. 8. Charges were also pursued against the children’s mother for assisting in the depravation of their liberty. See id. All charges were made under Mauritania’s 2007 Slavery Law that criminalizes slavery. See id.

In November 2011, the criminal proceedings resulted in the conviction of Ahmed Ould Hassine for both engaging in child slavery and for depriving the complainants of an education. See id. at para. 9. His sister, who was the second slave owner, faced the same charges and was acquitted. Ahmed Ould Hassine’s sentence was two years’ imprisonment and the imposition of a fine. His four brothers and the children’s mother were also convicted of the charges against them. See id. An appeal hearing was scheduled in November 2015, four years after the initial criminal proceedings; however, the hearing was delayed on two occasions, one of which was due to the authorities’ inability to locate Ahmed Ould Hassine. See id. at para. 10-11.

Violations of the African Children’s Charter

Article 1 on Implementation of the Charter

Finding that Mauritania failed to prevent the violations of the Charter, and further, failed to appropriately prosecute and punish the slave owners, the ACERWC determined that Mauritania violated Article 1 (obligation to take measures to realize the rights in the Charter). See id. at paras. 55, 58. Under Article 1 of the African Children’s Charter, States parties must “take legislative and other measures such as administrative or judicial measures to realize the rights of children enumerated under the Charter.” See id. at para. 45. Implementation of the obligations arising from the Charter requires, the Committee noted, due diligence, which, in turn, requires preventing human rights violations and investigating, prosecuting, and punishing perpetrators after a violation. See id. at para. 52-53.

In its analysis, the ACERWC considered that the violations of Said and Yarg’s rights occurred for over 11 years, the State did not initiate either the investigation or the appeal, the proceedings were unduly delayed, and the other members of family received impunity. See id. at para. 58. Accordingly, the State failed to prevent the violation, failed to proactively investigate the incident and punish perpetrators, and failed to ensure an effective remedy in violation of Article 1. See id.

The Committee found Mauritania violated the right to non-discrimination by failing to prevent and remedy discriminatory treatment, but did not violate the right directly through State agents’ actions. See id. at paras. 62-65. The brothers in the case testified to experiencing a difference in treatment as compared to other children in the household, which was a result of their status as slaves, the Committee found. See id. at para. 60. The ACERWC notes that differential treatment can only be justified by a State’s legitimate interest, and must be necessary and proportionate to the aims that the State seeks to obtain; slavery, which is prohibited under Mauritania’s laws and international human rights law, does not justify discrimination, the Committee found. See id. at para. 61.

The ACERWC found that the State is liable based on its duty to protect against discriminatory treatment. The State, the Committee found, has a duty to protect against discriminatory treatment both through taking preventive measures against violations by non-State actors, or private actors, and through remedial measures after private actors commit violations. See id. at para. 62. The Committee held that the State’s failure to enact and implement laws so as to protect the applicants from violations of the Charter and to provide an effective remedy violated Article 3 (right to nondiscrimination). See id. at paras. 63-64. However, Mauritania was not found in breach of its duty to respect the right to non-discrimination, that is not to interfere directly with the right, because the evidence did not support the government’s direct interference with the right to non-discrimination. See id. at para. 65.

Article 4 on the Best Interest of the Child

The Committee held that the State violated Article 4 of the Charter (best interest of the child). See id. at para. 69. The obligation to consider the best interest of the child applies to State and non-State actors’ actions and requires an assessment of the implications on the rights of the child before making a decision; the assessment should include consideration of the child’s identity, protection of their rights, and their vulnerability. See id. at paras. 66, 68. The ACERWC found that the children were in a vulnerable situation as members of the historically enslaved ethnic group; Mauritania failed to support its anti-slavery legislative measures with administrative measures that would protect the rights of children who are affected by slavery and that prevent slavery; and the State failed to prosecute all the persons responsible for the applicants’ enslavement. See id. at para. 68. The ACERWEC held that the sentence, which was lower than the minimum sentence; the failure to investigate and prosecute all the perpetrators of slavery; and the delay in hearing the appeal amounted to violations of Article 4. See id. at paras. 69-70.

Articles on the Protection of Social and Cultural Rights

The ACERWC found that Mauritania violated several of the children’s social and cultural rights, as protected by the African Children’s Charter. The Committee found Mauritania in violation of Article 5 on the obligation to ensure the survival and development of the child because child labor significantly inhibits a child’s development and physical and psychological wellbeing, and the State failed to protect this right by inadequately preventing and punishing child slavery in this case. See id. at para. 71-73. Mauritania was also in violation of Article 11 on the right to free and compulsory education. See id. at para. 74. The children were not enrolled in school for the 11 years of enslavement, and their lack of the necessary identity documents prevented them from enrolling for another four years after escaping. See id. at para. 75.

Mauritania also violated Article 12 of the African Children’s Charter, the Committee held, which guarantees the children’s right to leisure, recreation, and cultural activities, since the children were unable to engage in recreational activities and were not allowed to rest or pray; Mauritania failed to prevent third parties from interfering with their Article 12 rights. See id. at paras. 77-78. Further, the Committee found that adopting legislative measures to abolish slavery was not enough to prevent child labor, so it held that Mauritania violated its obligations under Article 15 (right to protection from child labor) by failing to ensure that the prohibition of slavery was enforced. See id. at para. 84.

Because the children regularly experienced corporal punishment, mental abuse, and degrading treatment, the Committee held that the State failed to protect the children against child abuse and torture in violation of Article 16 of the Children’s Charter. Further, the Committee found that the State’s failure to punish the perpetrators and provide adequate remedies to the children amounted to a violation of Article 16. See id. at paras. 87-88. Finally, the Committee found that Mauritania also violated the children’s rights to protection against harmful social and cultural practices under Article 21 of the Children’s Charter as slavery denies the “dignity and worth of the child.” See id. at paras. 91-92.

Background on the Committee of Experts