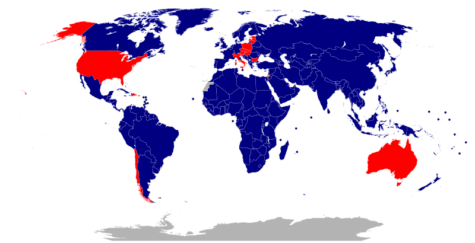 More than 160 countries adopted the Global Compact for Safe, Orderly, and Regular Migration (Compact), the first-ever intergovernmental agreement negotiated to holistically and comprehensively cover all aspects of international migration, following a two-day conference in Marrakech, Morocco that took place from December 10 to 11, 2018. [UN News: Marrakech; NYT] The document presents a framework for international cooperation and proclaims States’ commitment to protect the rights of migrants and refugees in transit or in destination countries, regardless of their reasons for leaving their country or their migration status. See Global Compact for Migration, Global Compact for Safe, Orderly and Regular Migration, 11 July 2018, para. 11. Although the Compact received broad support, it faced opposition and withdrawal by a number of States, including the United States, claiming concerns over migration flows and national sovereignty. [NYT] While an agreement on the rights of refugees already exists, the 1951 Convention relating to the Status of Refugees, protections for people in transit that do not qualify for refugee status have generally remained unprotected by law or guidelines until now. [Washington Post]

The Global Compact for Migration

The Global Compact for Migration is a 34-page intergovernmentally negotiated agreement that outlines objectives geared toward improving migration practices and policies, and mitigating crises. See Global Compact for Safe, Orderly and Regular Migration. Although the Compact is a non-legally binding agreement, it provides guidelines for global cooperation while upholding States’ sovereignty and international law obligations. See id. at paras. 7-8. Importantly, the Compact affirms the human rights of migrants and refugees, expressly acknowledging that they are “entitled to the same universal human rights and fundamental freedoms, which must be respected, protected and fulfilled at all times.” See id. at para. 4. The UN Secretary General, António Guterres, summarized the Compact as reflecting two key ideas: that migration is a timeless and continuous phenomenon and should be well-managed and that international cooperation makes national policies on these issues more likely to succeed. [UN News: Adoption]

The Compact outlines 23 distinct objectives, each containing a commitment and a number of actions endorsed as useful policy instruments and best practices. See Global Compact for Safe, Orderly and Regular Migration, para 16. The objectives apply to the full range of people in migration, including “regular migrants,” who entered a new country legally or have residence with full legal authorization; “irregular migrants,” most of whom entered legally, but who lack required legal permits; and “refugees,” who have been forced to flee their country because of persecution, war, or violence. [UN News: Migrants] The objectives include State actions such as data collection, enhancing the availability of legal paths for regular migration, addressing dangers frequently occurring along migration routes, and provision of services to ensure stability and integration in new countries of residence, among others. See Global Compact for Safe, Orderly and Regulation Migration, at para. 16. Further, they address new challenges posed by climate change and environmental degradation, encouraging nations to “[i]ntegrate displacement considerations into disaster preparedness strategies.” See id. at para. 18(j).

The Compact highlights a range of measures to facilitate the achievement of these objectives. These include cooperation with civil society, national human rights institutions, academia, and other relevant stakeholders; the launch of a new United Nations network on migration, including a follow-up and review procedure; and a biennial report from the Secretary General on updates related to the implementation of the Compact. See id. at paras. 40-47. It also calls for the creation of a “capacity-building mechanism,” which would encompass an information-sharing and solution-development “connection hub,” a “start-up fund” for financing relevant projects, and an open online “global knowledge platform.” See id. at para. 43. Plans for follow-up and review include re-designating the pre-existing High-level Dialogue on International Migration and Development as the “International Migration Review Forum,” and inviting regional and global institutions to provide additional fora for discussion and advancement of the Compact’s objectives. See id. at paras. 49-50. Member States are encouraged to develop national responses for implementation of the Compact and conduct national reviews of their progress. See id. at para. 53.

Many have lauded the Compact as a major international achievement. For example, the president of the International Federation of the Red Cross underscored the importance of the Compact, referring to these efforts as “an opportunity to fix a global approach to migration that is broken” and acknowledging the hundreds of thousands of people who suffer as a result every day. [IFRC Press Release] Amidst praise for the agreement, the UN Secretary General addressed detractors, flatly rejecting the notion that the Compact would force States to adopt UN migration policies. [UN News: Adoption] He reiterated that the Compact is “not establishing a new right to migrate,” but rather “the obligation to respect the human rights of migrants.” [NYT] Regarding those countries that decided to pull out of the agreement, Special Representative for International Migration, Louise Arbour, stated that this action “reflected very poorly” upon those that had participated in the negotiations. [UN News: Migrants]

The Compact has also been critiqued for a number of perceived weaknesses. One of which is the insistence on respect for national sovereignty, which leaves the international community with no clear response to countries that choose to violate the rights of migrants. [Washington Post] Moreover, because the agreement is not legally binding, some argue that it is more significant as a symbolic affirmation of migrants’ rights rather than as an instrument creating actual mechanisms for implementation and oversight. [Washington Post] Finally, there is the additional concern that the agreement lacks the support of some key international players, including the U.S., Australia, Israel, and several European States. [Washington Post]

Prior International Efforts on Global Migration

The recent agreement is the product of two years of intense negotiations led by former UN Commissioner for Human Rights Louise Arbour. [Washington Post] In September 2016, world leaders met in New York to discuss issues around global migration within the UN General Assembly. See IOM UN Migration, Global Compact for Migration. At this meeting, 193 UN Member States adopted the New York Declaration for Refugees and Migrants (New York Declaration), with a view toward addressing human migration through international cooperation. See id. The New York Declaration laid out a timeline of intergovernmental efforts, including consultations and negotiations, geared toward the adoption of the Global Compact for Migration in 2018. See id. The Compact has been formulated based on a number of preceding efforts, including the 2030 Agenda for Sustainable Development and the Addis Ababa Action Agenda, the Declaration of the High-level Dialogue on International Migration and Development adopted in October 2013, along with the work of the former Special Representative of the Secretary General for International Migration and Development. See Global Compact for Safe, Orderly and Regular Migration, at para. 6.

For more information on immigration and migrants’ rights, asylum and the rights of refugees, or citizenship and nationality, visit IJRC’s Online Resource Hub. To stay up-to-date on international human rights law news, visit IJRC’s News Room or subscribe to the IJRC Daily.