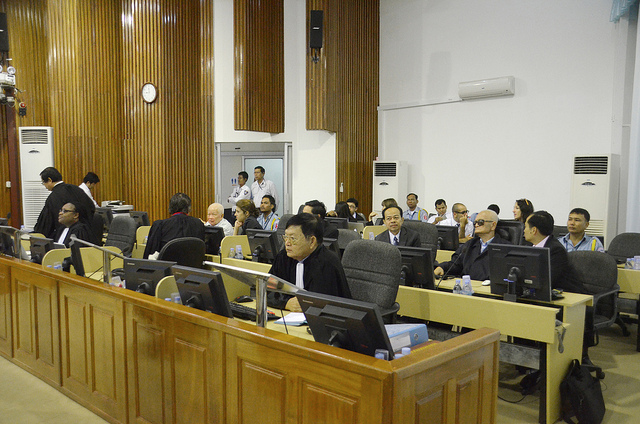 Nuon Chea and Khieu Samphan during the the first day of closing statements in Case 002/01 on 16 October 2013
Credit: ECCC

The Extraordinary Chambers in the Courts of Cambodia (ECCC) last week issued its first convictions against former senior Khmer Rouge leaders, finding Nuon Chea and Khieu Samphan guilty of crimes against humanity committed during the Khmer Rouge’s rule in the 1970s. [ECCC Press Release] The convictions, part of only the second set of charges to be resolved by the ECCC, come after nearly four years of litigation before the United Nations-assisted hybrid tribunal. In recent years, the court has been plagued by controversy and delays that at times seemed likely to outlast the few, elderly defendants brought before it. [IJRC] END_OF_DOCUMENT_TOKEN_TO_BE_REPLACED 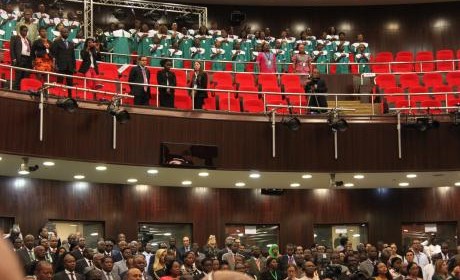 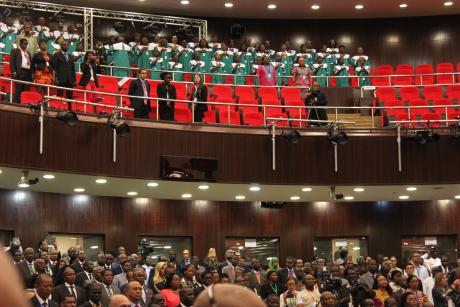 In a controversial decision, the African Union has decided to specifically exempt senior government officials from prosecution by a proposed regional human rights court, which will otherwise be authorized to try individuals accused of crimes against humanity and other serious international crimes. At its 23rd Ordinary Session in Malabo, Equatorial Guinea last week, the Assembly of the African Union (AU) adopted an amendment to the Protocol on the Statute of the African Court of Justice and Human Rights to immunize African leaders accused of committing serious human rights violations from criminal prosecution before the proposed African Court of Justice and Human Rights. [African Union] While it is hoped that the amendment will foster greater cooperation and compliance with the future Court, the limitation on its mandate has been the subject of intense criticism by civil society groups. END_OF_DOCUMENT_TOKEN_TO_BE_REPLACED 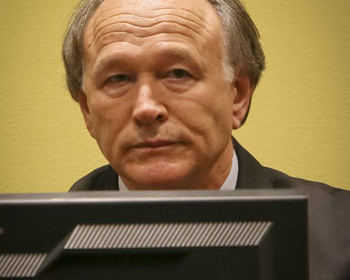 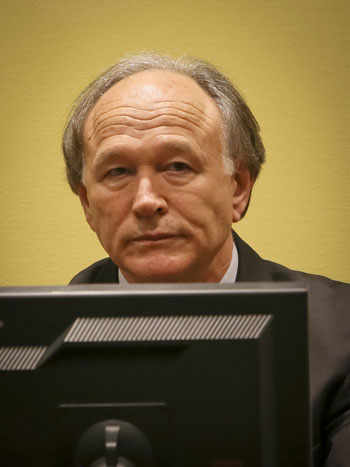 On January 27, the Appeals Chamber of the International Criminal Tribunal for the former Yugoslavia (ICTY) confirmed Vlastimir Đorđević’s conviction in relation to crimes committed by Serbian forces against Albanians, during the conflict in Kosovo. [ICTY: Appeal Judgment Summary] It partially granted appeals raised by both the prosecution and defense, reducing Đorđević’s sentence from 27 to 18 years. This judgment marked the conclusion of all ICTY cases concerning individuals indicted for war crimes committed in Kosovo. [ICTY: Đorđević Press Release] END_OF_DOCUMENT_TOKEN_TO_BE_REPLACED 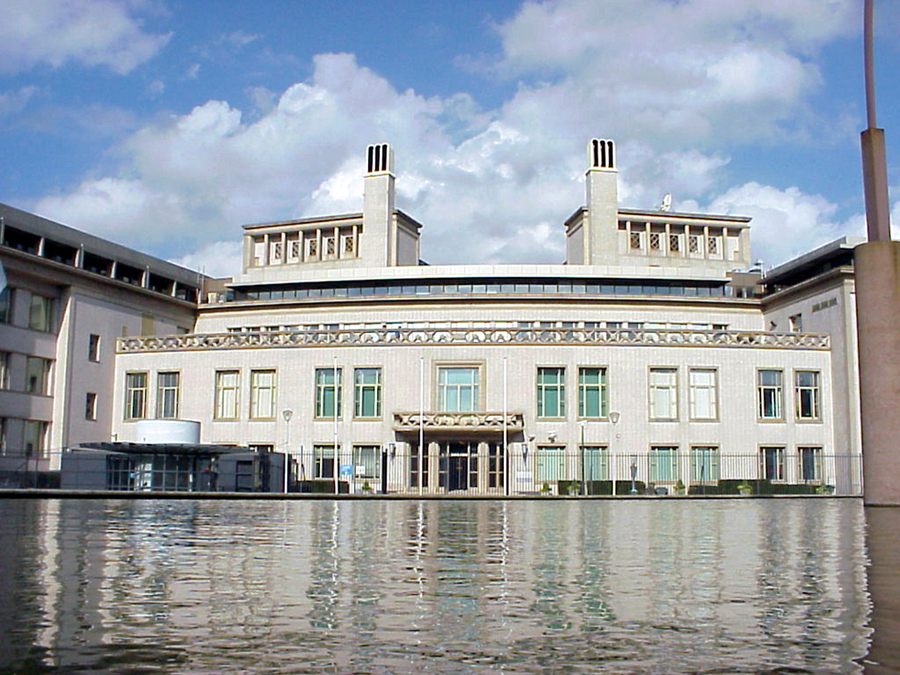 The final case pending before the International Criminal Tribunal for the former Yugoslavia (ICTY) involves Goran Hadžić, the former president of the self-proclaimed Republic of Serbian Krajina, who is indicted for persecution and murder of non-Serbs, as well as unlawful imprisonment, torture, inhumane acts, cruel treatment, forcible transfer, deportation and wanton destruction, and plunder of private or public property.  Hadžić was indicted in 2004, but was not located and arrested until 2011.  The trial phase of the case is scheduled to begin on October 16, 2012.

Over the past twenty years, the ICTY has indicted 161 individuals and acquitted 13.  Of the 64 persons sentenced so far, 39 have either already served their sentences or died while incarcerated. Although the Goran Hadžić prosecution is the Tribunal’s last to begin, 35 of the Tribunal’s trials remain ongoing. The Tribunal also transferred 13 cases involving “intermediate and lower-level accused to competent national jurisdictions.”  Another 36 individuals either died pending or during trial or had the indictments against them withdrawn. END_OF_DOCUMENT_TOKEN_TO_BE_REPLACED

The International Criminal Tribunal for the Former Yugoslavia (ICTY) convicted seven Bosnian Serb military leaders owing to their participation in the Srebrenica massacre of 1995, in which over 7,000 Bosnian Muslim men and boys were killed. Read the judgment summary here. [Impunity Watch, ICTY]  From among the many atrocities committed during the Balkans conflict, the Srebrenica massacre has been singled out by the ICTY and International Court of Justice (ICJ) as an act of genocide.

The crimes of which the seven former military and police officials were convicted include: genocide, crimes against humanity and violations of the laws or customs of war, including extermination, murder, persecution, and inhumane acts.  The Trial Chamber found that the crime of deportation had not been proven.  The ICTY’s press release notes:

This trial has been the largest conducted to date at the ICTY. Trial proceedings in this case commenced on 21 August 2006 and concluded on 15 September 2009. The trial took a total of 425 days during which the Trial Chamber heard or otherwise admitted evidence from 315 witnesses: 182 by the Prosecution; 132 by all the Defence teams and one by the Trial Chamber. There are 5,383 exhibits before the Trial Chamber, amounting to 87,392 page numbers.

The Tribunal has indicted a total of 21 individuals for crimes committed in Srebrenica. Among these are Radislav Krstić who was the first individual to be convicted of aiding and abetting genocide in Srebrenica on 2 August 2001. The Appeals Chamber sentenced him to 35 years’ imprisonment on 19 April 2004. The trials of Radovan Karadžić, Zdravko Tolimir as well as Jovica Stanišić and Franko Simatović are ongoing. To date, Ratko Mladić, the war-time leader of the Bosnian Serb Army also charged with genocide in Srebrenica, remains a fugitive.

Since its establishment, the Tribunal has indicted 161 persons for serious violations of humanitarian law committed on the territory of the former Yugoslavia between 1991 and 2001.  Proceedings against 123 have been concluded. Proceedings are currently open for 40 Accused with 25 at trial stage and 11 before the Appeals Chamber.

Radio Free Europe has published an interesting commentary on the implications of the judgment, which is available here.

In March of this year, the Serbian parliament passed a resolution condemning the Srebrenica massacre and extended a formal apology to the victims and their families, although it did not categorize the massacre as genocide. [Radio Netherlands]  The International Court of Justice found the Srebrenica massacre to be genocide in its 2007 judgment in the case Application of the Convention on the Prevention and Punishment of the Crime of Genocide (Bosnia and Herzegovina v. Serbia and Montenegro), as have the ICTY and the War Crimes Chamber of the Court of Bosnia & Herzegovina.

As reported by Radio Netherlands, in March of this year a Dutch court upheld a lower court’s decision that the United Nations and Dutch government were immune from suit by families of victims of the massacre who alleged that the UN had abdicated its duty to protect the civilian population. [Radio Netherlands]

Relatedly, former acting Bosnian president Ejup Ganic was arrested in March of this year in London on allegations that he had committed war crimes during the conflict.  Serbia is seeking his extradition from the U.K. despite a previously unsuccessful attempt to secure his prosecution by the ICTY. [BBC, RFE]

See PBS’ interactive timeline of events leading up to the massacre here.

The trial of Radovan Karadzic for acts of genocide, crimes against humanity and war crimes resumed yesterday before the International Criminal Tribunal for the former Yugoslavia, in The Hague.  The trial, which first began in October 2009, was suspended when Karadzic refused to participate.  See the ICTY’s fact sheet on the trial here.

Karadzic had previously been sued in the United States by victims of his alleged crimes.  The Second Circuit Court of Appeal’s resolution of that civil claim is considered a landmark decision on the reach of the Alien Tort Claims Act and Torture Victims Protection Act (available here and here).

*       The Inter-American Commission on Human Rights expressed its concern over the death of Cuban dissident Orlando Zapata and the murders of four Guatemalan human rights defenders.

*      The Colombian Constitutional Court ruled out third four-year term for President Uribe, rejecting national law that would have allowed a referendum on constitutional reform. [Washington Post]  Read the Court’s press release (in Spanish).

*       On Wednesday, D.C. District Court Judge Henry H. Kennedy ordered the release of a Yemeni prisoner from Guantanamo. [McClatchy] The same day, Judge Gladys Kessler denied the habeas petitions (here and here) presented by two other Yemeni Guantanamo detainees who had been cleared for released two years ago. [NewsObserver]  These decisions come one week after a different D.C. District Court judge held that wrongful death claims by Guantanamo detainees’ families are barred by the Military Commission’s Act and immunity enjoyed by government agents for activities falling within the “scope of employment”. [Center for Constitutional Rights] See Judge Ellen Segal Huvelle’s opinion in Al-Zahrani v. Rumsfeld here.

*       The Rwandan ambassador to Canada during Rwandan genocide was denied opportunity to rebut presumption of complicity in human rights violations in deportation proceedings. [Montreal Gazette]

*       The ICC will pursue its investigation of September 2009 massacres in Guinea as possible crimes against humanity; examination of the situation was opened last October. [Washington Post, ICC]

*       At the ICTY, the trial against former army intelligence officer Zdravko Tolimir began on Friday, on charges of genocide, crimes against humanity and war crimes in relation to the killing and expulsion of members of the Bosnian Muslim population of Srebrenica and other communities. [JURIST, ICTY]

*       The European Court of Human Rights issued several notable judgments this week, including decisions that Turkey’s criminal conviction of members of a religious group for their manner of dress (Arslan and Others v. Turkey) and Croatian authorities’ search of detained defendants’ vehicle without their knowledge or attorney’s presence (Lisica v. Croatia) constituted violations of the European Convention, while Serbia could not be held responsible for an inmate’s poor health when the inmate had refused treatment (Dermanovic v. Serbia).  The Court also held a hearing on the admissibility and merits of a same-sex couple’s complaint against Austria for refusing to allow them to enter into a marriage contract (Schalk and Kopf v. Austria).

*       The Inter-American Court of Human Rights released its new Rules on the Functioning of the Victims’ Legal Assistance Fund for cases before it.

*       The U.N. Special Rapporteur on human rights and counter-terrorism will present his latest report to the Human Rights Council during its March session.

*       The Committee on the Elimination of Racial Discrimination considered the State reports of Iceland, Japan and the Netherlands.