IJRC regularly hosts events and trainings intended to raise awareness of human rights issues and advocacy opportunities, and to build connections among activists and attorneys working to address inequalities and injustices.

To keep informed of IJRC events in the San Francisco Bay Area, write to ijrc@ijrcenter.org to be added to the Bay Area Human Rights email list. For information on past and upcoming educational and capacity-building seminars, please see the Trainings page.

IJRC hosts Human Rights Happy Hours in San Francisco in order to provide a forum for discussion of human rights topics of concern, highlight local advocates’ work to advance civil rights and social justice, and give community members an opportunity to interact and share information.

The Human Right to Housing 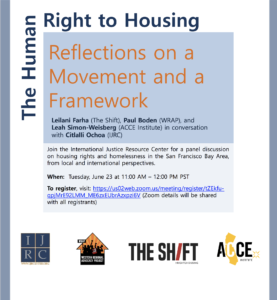 On June 23, 2020, IJRC hosted a virtual panel discussion on efforts to advance the right to housing in California, including through engagement with international human rights oversight bodies. The panelists were Leilani Farha (former UN Special Rapporteur on the right to housing), Leah Simon-Weisberg (of the ACCE Institute), and Paul Boden (of the Western Regional Advocacy Project).

Migrants’ Rights: Under Attack & Under Review 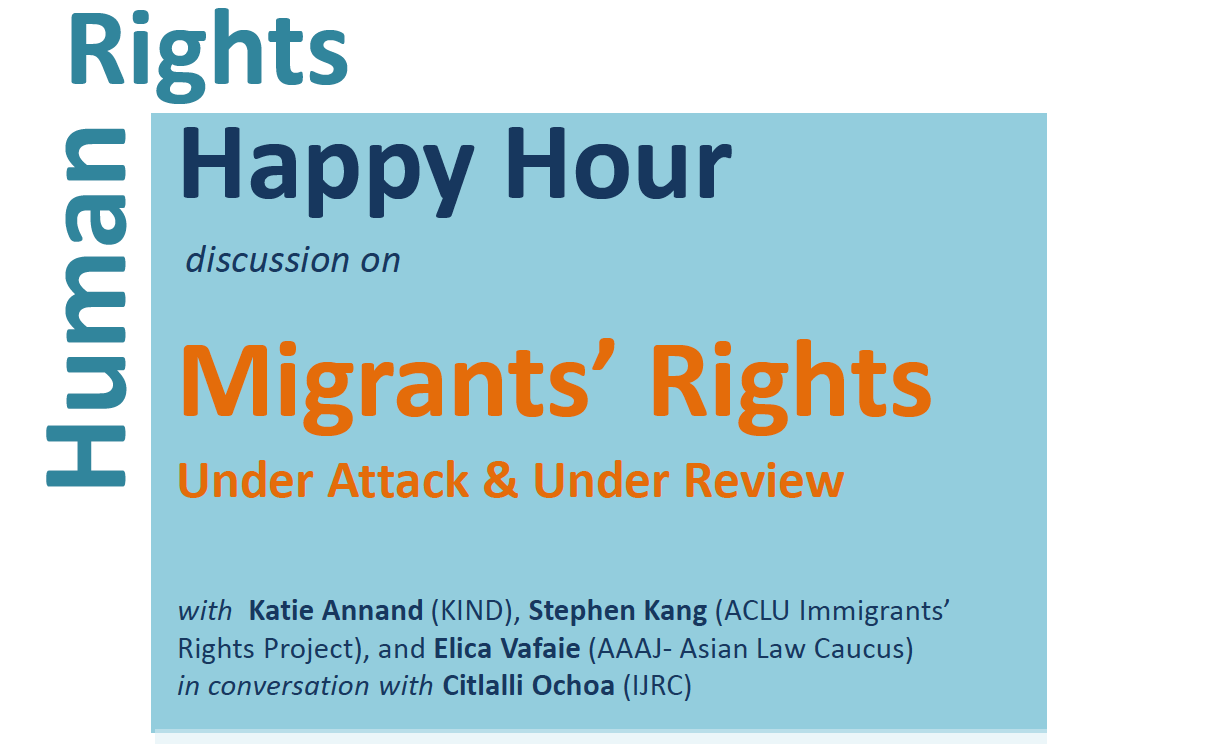 On October 17, 2018, the International Justice Resource Center organized a panel on Bay Area organizations’ work to protect and defend the human rights of migrants. See the event webpage for speaker bios and additional information.

On November 7, 2017, the International Justice Resource Center co-sponsored a talk organized by the Wikimedia Foundation and Mozilla, with United Nations Special Rapporteur on the promotion and protection of the right to freedom of opinion and expression, David Kaye, about the increasing challenges to freedom of expression and other human rights in the digital age.

David Kaye is the UN Special Rapporteur on the promotion and protection of the right to freedom of opinion and expression, and an international legal expert who heads the International Justice Clinic at the University of California, Irvine School of Law. As Special Rapporteur, David has raised global awareness of key free speech concerns, including protection of whistleblowers and online anonymity. He visits countries around the world to document and promote respect for freedom of expression, and is one of the United Nations’ most high-profile experts.

This event was part of the Wikimedia Foundation “Free Open Shared” series of talks. Watch the video on YouTube.

On October 18, 2017, IJRC organized a timely discussion with Malkia Cyril, DeRay Mckesson, Kristian Lum, and Nicole A. Ozer on police brutality and surveillance in communities of color. See the flyer for additional details.

We heard from these inspiring speakers on the grave problems of excessive use of force and discrimination in policing, the challenges of data collection, and the role of technology and media as tools of both advocacy and oppression. Watch the video on our YouTube page.

Human Rights in the Time of Trump

This July 2017 event explored the topic of what the 2016 U.S. election will mean for human rights advocacy at home and abroad. Panelists discussed the strategies advocates are using to identify the Trump Administration’s priorities, foster collaboration with civil society, push back against policies and actions that harm human rights, and encourage progressive U.S. leadership on the world stage.

Additional details on the registration page.

On July 28, 2016, IJRC co-organized a panel providing a behind-the-scenes look at the International Criminal Tribunal for the former Yugoslavia’s landmark conviction of Radovan Karadzic for the genocide in Srebrenica and other crimes. The panel was followed by an informal wine and cheese reception. Sponsors included IJRC, the Bar Association of San Francisco, the Center for Justice & Accountability, and Human Rights Advocates. Additional details are available here.

Freedom of Expression in th

IJRC hosted an intimate and informal evening reception with David Kaye, the United Nations-appointed expert on freedom of expression, on the evening of March 31st, 2016.

David Kaye is the UN Special Rapporteur on the promotion and protection of the right to freedom of opinion and expression, and an international legal expert who heads the International Justice Clinic at the University of California, Irvine School of Law. As Special Rapporteur, David has raised global awareness of key free speech concerns, including protection of whistleblowers and online anonymity. He visits countries around the world to document and promote respect for freedom of expression, and is one of the United Nations’ most high-profile experts.

Earlier in March 2016, he weighed in on the dispute over Apple’s encryption of the iPhone, advising the judge deciding FBI’s search warrant request on the international human rights standards relevant to encryption and freedom of expression. 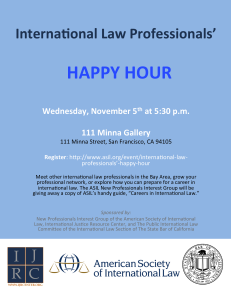 IJRC partnered with the American Society of International Law’s New Professionals Interest Group and The Public International Law Committee of the International Law Section of The State Bar of California to host this evening mixer for current practitioners, new professionals, and those interested in entering the field of international law. This event was held on November 5, 2015 at the 111 Minna Gallery in San Francisco. Visit our Flickr page to see photos from the happy hour.

Baseball in the Time of Cholera Film Night

At the February 13, 2014 Human Rights Happy Hour, we gathered to watch the critically-acclaimed short film, Baseball in the Time of Cholera, a 28-minute view into the world of human rights lawyer Mario Joseph and his fight to ensure justice and accountability for the thousands of lives lost in the 2010-2012 Haiti cholera outbreak. Following the film, attorney Nicole Phillips provided an explanation and update of the groundbreaking case seeking accountability from the United Nations for its role in the outbreak.

At the November 2013 Human Rights Happy Hour, Nasrina Bargzie, the National Security and Civil Rights attorney at Asian Americans Advancing Justice – Asian Law Caucus and co-chair of the US Human Rights Network’s ICCPR Taskforce, presented an overview of the ongoing review of the United States government’s implementation of the International Covenant on Civil and Political Rights.

The July 2013 Human Rights Happy Hour featured Nicole Phillips, a staff attorney with the Institute for Justice & Democracy in Haiti, who provided a timely update on efforts to seek justice and accountability for the systematic human rights abuses committed during the rule of former Haitian dictator Jean-Claude “Baby Doc” Duvalier.

Challenging Surveillance of Muslims in America