A number of distinct courts and monitoring bodies oversee States’ implementation of, and compliance with, their specific obligations under international human rights law. These bodies may be judicial (national, regional or international courts), quasi-judicial (bodies that are not courts, but do decide individual complaints), political (led by States), or supervisory (documenting and assessing human rights conditions). Each of these entities has been established either directly by individual States or by groups of States, as members of intergovernmental organizations.

Use the links below to learn more about each human rights oversight system. For an explanation of the history of these bodies, and the standards they enforce, see the Overview of the Human Rights Framework. Alternatively, click on the image below to open a PDF version of the diagram with hyperlinks to explanations of each body. 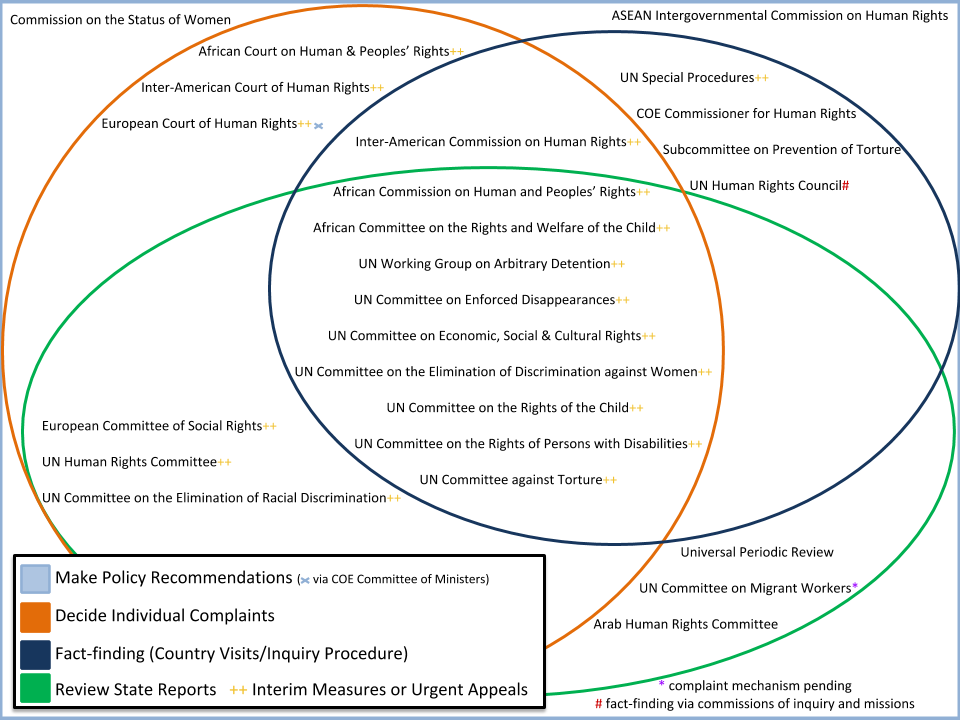 Additionally, our quick reference chart identifies the mechanism(s) responsible for interpreting and applying each of the principal UN and regional human rights treaties, and lists their competencies, along with links to more information.

At the universal level, the United Nations has established a number of institutions and procedures to monitor human rights in the 193 countries that belong to the UN. These mechanisms include the:

At the regional level, intergovernmental organizations have established regional human rights systems, with widely different mandates, in each of the following regions:

These include the International Court of Justice, which settles a wide variety of disputes between States, and the following courts that prosecute individuals for violations of international law: