ECtHR: Same-Sex Couples Must Be Equally Eligible for Family-Based Migration 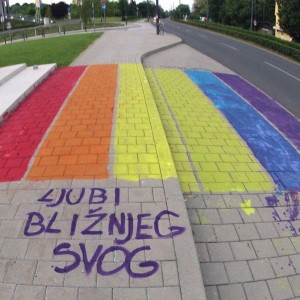 Rainbow painted on the sidewalk in Zagreb with phrase “love thy neighbor”
Credit: Crol.hr via Wikimedia Commons

In a recent decision regarding family reunification for a same-sex couple, the European Court of Human Rights (ECtHR) found Croatia to have violated a non-citizen’s human rights by denying her application for a residence permit to join her partner in Croatia. See ECtHR, Pajić v. Croatia, no. 68453/13, Judgment of 23 February 2016. The ECtHR unanimously held that Croatia’s Aliens Act, under which same-sex couples do not qualify for residency permits based on family reunification, violated Article 14 (prohibition of discrimination) taken in conjunction with Article 8 (right to respect for private and family life) of the European Convention on Human Rights. Id. at paras. 69-86. Ms. Pajić submitted a complaint to the ECtHR in October 2013, alleging discrimination on the basis of her sexual orientation. Id. at paras. 1, 3.

While the Court has previously considered cases involving discrimination on the basis of sexual orientation in the area of family rights, this is apparently the first time the Court has reviewed a State’s treatment of same-sex couples’ eligibility for family-based migration. See id. at paras. 53-60. See also Oliari and Others v. Italy, nos. 18766/11 and 36030/11, Judgment of 21 July 2015 (legal recognition of same-sex relationships); ECtHR, E.B. v. France [GC], no. 43546/02, Judgment of 22 January 2008 (adoption rights of person in same-sex relationship). A complaint against Italy that also involves same-sex couples’ eligibility for family reunification is currently pending before the Court. See ECtHR, Taddeucci and McCall v. Italy (communicated case), no. 51362/09.

In 2011, Ms. Pajić submitted a request for a residence permit in Croatia on the grounds of family reunification with D.B., her partner of two years. See ECtHR, Pajić v. Croatia, Judgment of 23 February 2016, at para. 7. While Ms. Pajić was living in Bosnia and Herzegovina at the time she submitted her application for a permit, she was educated in Croatia, had lived in Zagreb for 17 years, and hoped to return to Croatia to establish a household and start a business with D.B. See id.

In February 2012 the Sisak Police Department dismissed her request for family reunification, simply stating that she did not meet all of the requirements under the Aliens Act. Id. at para. 10. After she appealed, the Ministry of the Interior confirmed the dismissal on the grounds that – taking into consideration the definition of family under the Family Act – same-sex partners do not fall under the “immediate family member” category within the Aliens Act, a category under which partners may apply for residence permits for family reunification purposes. Id. at paras. 10-12.

Ms. Pajić argued that if she was not to be considered D.B.’s “immediate family member”, then she should be considered as her “other relative” within the meaning of the Aliens Act. See id. at para. 11. The Ministry of the Interior stated that same-sex unions were not included in the legal definition of family and that the applicant had not demonstrated “specific personal or serious humanitarian reasons for a family reunification in Croatia” as required to consider her an “other relative” under the Aliens Act. Id. at para. 12. Following this decision, Ms. Pajić filed a complaint with the Zagreb Administrative Court in July 2012 and the Constitutional Court in March 2013, which found, respectively, that she did not meet the legal requirements for family reunification and had not been discriminated against, and dismissed her claims. See id. at paras. 14 and 15.

Ms. Pajić asked the ECtHR to review her complaint in view of the right to respect for private and family life protected by Article 8 of the European Convention on Human Rights. Id. at para. 49. She argued that the ECtHR’s jurisprudence has established that a “stable de facto relationship between same-sex couples should be considered as family life under that provision.” Id. She further alleged that there were no convincing reasons to justify denying unmarried same-sex couples a residence permit while granting such permits to unmarried different-sex couples. See id. at para. 50.

The State argued that it was within its margin of appreciation to interpret the concepts of family and private life for those in relationships, especially where same-sex couples are concerned. See id. at para. 51. Further, the State pointed out that Ms. Pajić failed to meet the requirements of the Aliens Act because she was not in a relationship with D.B. for a period of three years when she had submitted her request for family reunification. See id. Bosnia and Herzegovina declined to intervene in the case. See id. at para. 5.

The ECtHR held that the implicit exclusion of unmarried same-sex couples from the Aliens Act amounted to a difference in treatment on the basis of sexual orientation, and without a weighty justification establishing that this exclusion was necessary, the Court held that Croatia violated the Convention. See id. at paras. 74, 82-84, 86.

While acknowledging States’ margin of appreciation in determining when differences in treatment are justified, as well as their “wide margin” in managing migration, the Court confirmed that “differences based on sexual orientation require ‘particularly convincing and weighty reasons.’” ECtHR, Pajić v. Croatia, Judgment of 23 February 2016, at paras. 57-59. States may not treat individuals differently based only on their sexual orientation and, before the European Court, the government bears the burden of justifying any difference in treatment. Id. at paras. 59-60.

The European Court explicitly addressed whether same-sex relationships are protected by the “family life” component of Article 8, in addition to the concept of private life, and whether cohabitation was a required element of family life. It reviewed its prior caselaw recognizing the inclusion of same-sex couples in its understanding of family life and reiterated “that there can be no basis for drawing a distinction between stable same-sex couples who live together and those who – for professional and social reasons – do not, since the fact of cohabitating does not deprive the couples concerned of the stability which brings them within the scope of family life within the meaning of Article 8.” See id. at paras. 64-65.

Having concluded that Ms. Pajić and her partner were similarly situated compared to different-sex couples but had been treated differently, the Court examined whether that difference in treatment was justified. Id. at paras 69-85. Reviewing the Aliens Act’s “blanket exclusion” of same-sex couples from eligibility for family reunification and the Croatian authorities’ failure to point to any compelling justification for the difference in treatment, the Court found Ms. Pajić’s treatment unacceptable. Id. at paras. 82-84. Moreover, it noted that the couple had been together for three years by the time their case was heard by the Administrative Court, but the court had not actually evaluated the factual basis of Ms. Pajić’s application because it relied only on her sexual orientation. Id. at para. 76. Accordingly, the Court held that Croatia violated the right to non-discrimination under Article 14 taken in conjunction with Article 8 on the right to private and family life. Id. at para. 86.

Although this was a case of first impression for the ECtHR, the issue of discrimination motivated by sexual orientation has been brought to the attention of the Croatian government in the past through a case communicated to the ECtHR. In Sabalić v. Croatia, a Croatian woman was attacked in a bar by a man after she revealed her sexual orientation, shouting “all lesbians should be killed.” ECtHR, Sabalić v. Croatia (communicated case), no. 50231/13. The applicant alleged that she was discriminated against on the basis of her sexual orientation and that the domestic remedies were inadequate, in violation of articles 3, 8, and 13. Id.

In recent years, Croatia’s domestic laws have sometimes made strides in protecting the rights of same-sex couples and sometimes deprived them of their rights. In December 2013, a majority of Croatians voted for a constitutional ban on gay marriage, defining marriage as exclusively between a man and woman. [The Guardian]  However, in September 2014, Croatia introduced the Same-Sex Life Partnership Act, which granted same-sex couples many of the same rights enjoyed by different-sex couples. See ECtHR, Pajić v. Croatia, Judgment of 23 February 2016, at para. 23.

The European Court has also addressed discrimination on the basis of sexual orientation or gender identity in other European countries. For an overview of these cases, see the Court’s factsheets on Sexual Orientation Issues and Gender Identity Issues.