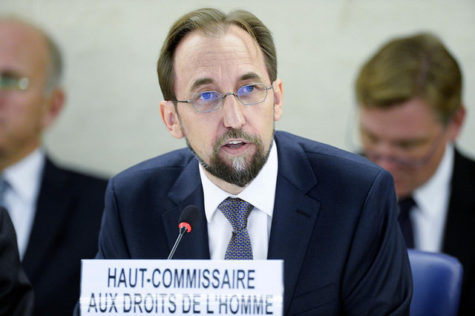 Key Findings in the Report

The Use of Force in Jammu and Kashmir

Impunity and Access to Justice in Jammu and Kashmir

The OHCHR also highlighted several key pieces of legislation in the Indian state of Jammu and Kashmir, such as the Armed Forces (Jammu and Kashmir) Special Powers Act, 1990, and the Jammu and Kashmir Public Safety Act, 1978, that promote impunity and that serve to prevent victims’ access to justice. See id. at paras. 7, 42. The report noted that this legislation authorizes the use of lethal force against a person in violation of an order “prohibiting the assembly of five or more persons,” which the OHCHR observes violates the international legal standards on the use of force, specifically the principles of necessity and proportionality; international norms, the OHCHR points out, limit the use of firearms to a method of last resort. See id. at para. 45.

Furthermore, this legislation provides security services with virtual immunity from prosecution for any human rights violations because it requires prosecutors to obtain express authorization from the Indian government before security forces may be prosecuted. See id. at para. 44. In the 28 years since the laws’ enactment, there has not been a single prosecution by the government in Jammu and Kashmir. See id.  Similarly, despite evidence of sexual violence by security forces, the report found that Indian authorities have failed to investigate and prosecute allegations, noting that there is no record of a single prosecution for sexual violence brought against a member of the security forces. See id. at para. 125.

The report found that the Indian government’s use of internet- and telecommunications-shutdowns and targeting of the media interfered with the exercise of the right to freedom of opinion and expression. See id. at paras.107–114, 117. Moreover, the report stated that widespread protests, curfews, and frequent strikes, impeded the right to education within the state. See id. at para. 119.

The report also focused on the prevalence of non-governmental armed groups operating within the Indian state of Jammu and Kashmir. The report stated that these armed groups are responsible for significant human rights violations, including kidnappings, killings of civilians, and sexual violence. See id. at paras. 5, 135. Civil society attributed approximately 16-20 killings during the period from July 2016 to April 2018 to these armed groups. See id. at paras. 6, 136. However, the report noted that while armed groups maintain responsibility for their human rights violations, States also have an obligation to “exercise due diligence and to do everything in their capacity to protect all such persons from threats to  the  enjoyment  of  their  human  rights  posed  by  non-State  actors, including  de  facto  authorities  and  armed  groups.” See id. at para. 40.

The report acknowledged that the abuses in the Pakistani-administered portions of Kashmir are of a “different calibre or magnitude and of a more structural nature” than those found in the Indian controlled areas. See id. at para. 14. The OHCHR found that individuals living in the Pakistani-administered areas of Kashmir are not afforded all of the rights and protections provided to those under the Pakistani constitution. See id. at para. 15. For example, certain administrative regions prohibit criticism of the region’s accession to Pakistan, which the report concludes violates international standards on the rights to freedom of expression, opinion, assembly, and association. See id. at para. 16. The report also highlights Pakistan’s use of anti-terrorism legislation to imprison individuals raising issues related to the “rights of the people.” See id. at para. 17. A national civil society organization reported that hundreds of individuals have been imprisoned in connection with the anti-terrorism legislation. See id. at paras. 17, 155-58.

Recommendation to the Human Rights Council

In light of the report’s findings and gathered statistics, the OHCHR recommended that the UN Human Rights Council establish “a commission of inquiry to conduct a comprehensive independent international investigation” to adequately document the scope of violations in Kashmir. See id. at 48. This recommendation comes in light of India and Pakistan’s repeated refusal to provide the OHCHR with unconditional access to either side of the Line of Control in Kashmir. [OHCHR Press Release] See OHCHR, Report on the Situation of Human Rights in Kashmir, para. 2.

Among numerous recommendations, the OHCHR recommended that India urgently repeal the Armed Forces (Jammu and Kashmir) Special Powers Act, 1990, and amend the Jammu and Kashmir Public Safety Act, 1978, in addition to more general steps to end impunity and ensure access to justice for victims of human rights violations. See OHCHR, Report on the Situation of Human Rights in Kashmir, 48. This includes taking steps to investigate, prosecute, and provide remedies for human rights violations, such as unlawful killings, enforced disappearances, arbitrary detentions, and sexual violence. See id.

Additionally, the OHCHR recommended that India immediately end the use of pellet-firing shotguns for the purpose of crowd control, and end any restrictions on access to the internet and telecommunications networks and on the ability of journalists to perform their work. See id. at 48-49.

The OHCHR recommended that Pakistan take steps to amend the constitutions of the administered area of Kashmir to include fundamental protections for the freedoms of expression, opinion, assembly, and association. See id. at 49. Additionally, Pakistan should end, the OHCHR recommended, the use of anti-terror legislation to imprison those engaging in peaceful political activities, and Pakistan should release from detention activists, journalists, or other civil society actors being held for peacefully expressing their political opinions. See id.

India has assumed human rights obligations through the ratification of the International Covenant on Civil and Political Rights; International Covenant on Economic, Social and Cultural Rights; Convention on the Elimination of All Forms of Discrimination Against Women; Convention on the Rights of Persons with Disabilities; Convention on the Rights of the Child, and its protocols addressing children in armed conflict and the sale of children, child prostitution, and child pornography; and International Convention on the Elimination of All Forms of Racial Discrimination. See OHCHR, Status of Ratification Interactive Dashboard: India. India is subject to the oversight of universal rights bodies, including the Human Rights Council and its Universal Periodic Review, and UN special procedures. Additionally, the treaty bodies associated with the UN treaties India has ratified periodically review its State reports on its implementation of those treaties.

Pakistan has assumed human rights obligations through the ratification of the International Convention on the Elimination of All Forms of Racial Discrimination; International Covenant on Civil and Political Rights; International Covenant on Economic, Social and Cultural Rights; Convention on the Elimination of All Forms of Discrimination against Women; Convention against Torture and Other Cruel, Inhuman or Degrading Treatment or Punishment; Convention on the Rights of the Child, and its protocols addressing children in armed conflict and the sale of children, child prostitution, and child pornography; and Convention on the Rights of Persons with Disabilities. See OHCHR, Status of Ratification Interactive Dashboard: Pakistan. Pakistan is subject to the oversight of universal rights bodies, including the Human Rights Council and its Universal Periodic Review, and UN special procedures. Additionally, the treaty bodies associated with the UN treaties Pakistan has ratified periodically review its State reports on its implementation of those treaties.

Through the ratified treaties, both India and Pakistan have international human rights obligations to ensure the rights to life, prohibition of torture and inhuman treatment, freedom of assembly, freedom of association, freedom of expression, education, and fair trial, among other rights.