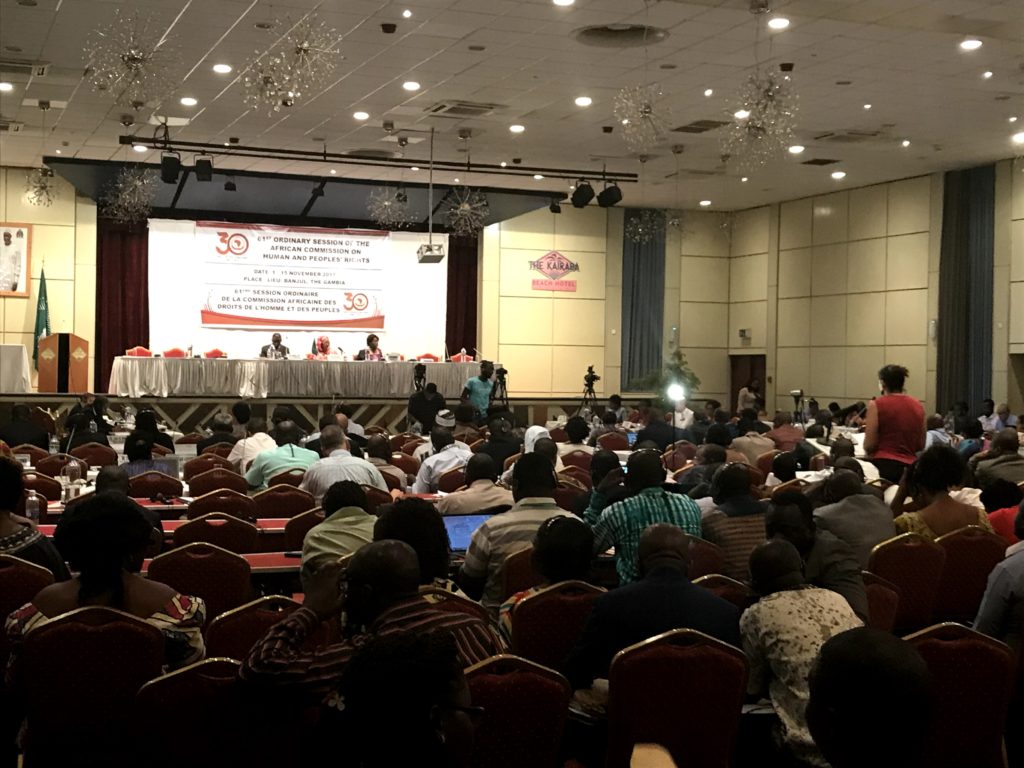 On August 8, 2018, the African Commission on Human and Peoples’ Rights (ACHPR) stripped the Coalition of African Lesbians (CAL) of its observer status following decisions by the African Union Executive Council that called on the ACHPR to consider “African values” when reviewing applications for observer status. [CAL: Denied] The ACHPR’s decision to withdraw CAL’s observer status comes after years of advocacy efforts by CAL to obtain that status, and follows a drawn-out process before the ACHPR that has been marred by discriminatory statements on the part of both the continent’s human rights oversight body and the political organs of the African Union. [Thomson Reuters Foundation] CAL is a pan-Africanist network of organizations in sub-Saharan Africa committed to advancing the rights of all women in Africa and strengthening the leadership of lesbian women in various movements. See CAL, Why We Exist. The decision to revoke CAL’s observer status, which is a requirement for certain types of participation in the ACHPR’s activities and sessions, has raised concerns about the ACHPR’s impartiality and independence. [EJIL: Talk!] The Executive Council’s June 2018 decision calling for CAL’s status to be withdrawn also raised other threats to the ACHPR’s functioning, including the possible elimination of the ACHPR’s jurisdiction over human rights complaints.

For its part, the ACHPR had also shown hostility to CAL and its observer status application, before briefly changing its view. In 2008, CAL submitted its first application for observer status, which the ACHPR rejected in 2010 because the organization allegedly did not promote or protect any of the rights in the African Charter. [CAL: Grant] In 2014, CAL submitted another application. [CAL: Grant] That same year, the ACHPR adopted its first resolution condemning violence and discrimination on the basis of sexual orientation and gender identity. [IJRC] CAL’s second application succeeded in part due to an Africa-wide campaign calling for the ACHPR to reconsider its 2010 decision. [CAL: Grant] CAL received observer status at the ACHPR’s 56th Ordinary Session on April 25, 2015, in a 5-4 vote with one abstention. [Thomson Reuters Foundation] However, CAL did not appear on the list of NGOs with observer status until after January 2018. See Internet Archive, NGOs with Observer Status (January 15, 2018).

In November 2016, the ACHPR took up the Executive Council’s request that it clarify its standards for observer status, including by requiring applicants to provide additional information about their activities and plans. See ACHPR, Resolution 361; ACHPR, Resolution 33. The new requirements do not provide any basis for denying or withdrawing observer status in connection with an organization’s thematic area of focus, membership, or substantive work. The only relevant criteria are those mandating that organizations have “objectives and activities in consonance with the fundamental principles and objectives enunciated in the African Union (AU) Constitutive Act, the preamble to the African Charter on Human and Peoples’ Rights, and the Protocol to the African Charter on Human and Peoples’ Rights on the Rights of Women in Africa” and “be NGOs working in the field of human rights in Africa.” See Resolution 361, Ch. I, para. 2.

a. The decision on the grant of the Observer Status was properly taken in terms of the Commission’s established processes and criteria.

b. The Commission is mandated to give effect to the African Charter under which everyone is entitled to the rights and subject to the duties spelt out in the Charter, and it is the duty of the Commission to protect those rights in line with the mandate entrusted to it under Article 45 of the Charter, without any discrimination because of status or other circumstances.

c. While fulfilling this mandate, the Commission remains alive to and mindful of the imperative not to encroach on domestic policy matters that fall outside its purview.

d. The Commission will continue to scrutinize the notion of ‘African Values’ within the framework of its mandate to interpret the African Charter.

Threats to the ACHPR’s Independence

The ACHPR was created as an independent human rights oversight body, not one under the control of the Executive Council, which is responsible to the AU Assembly of Heads of State and Government and which reviews the ACHPR’s regular activity reports. See African Union, Executive Council; ACHPR, Activity Reports. The ACHPR’s members, who are also elected by the Executive Council, are supposed to conduct themselves impartially, in their personal capacities, and in the service of human rights. See African Charter on Human and Peoples’ Rights, arts. 31, 38.

Human rights advocates have raised serious concerns that the Commission’s decision to withdraw CAL’s observer status at the AU Executive Council’s directive is indicative of the political influence at the ACHPR by Member States. [CAL: Denied; EJIL: Talk!] Additionally, they point to the decision to withdraw CAL’s observer status as an example of the Commission’s bias towards certain thematic issues over others and of the hostility that the Commissioners and the Commission, generally, display to NGOs that work on sexual orientation and gender identity issues. [Centre for Human Rights Press Release; CAL: Denied]

Alarmingly, the June 2018 Executive Council decision is not limited to calling for CAL’s observer status to be withdrawn. It also calls on States parties to reassess the ACHPR’s jurisdiction to receive and decide complaints of human rights violations, asking that they “conduct an analytical review of the interpretative mandate of the ACHPR in the light of a similar mandate exercised by the African Court and the potential for conflicting jurisprudence.” See Executive Council, Decision on the Report on the Joint Retreat of the Permanent Representatives’ Committee (PRC) and the African Commission on Human and Peoples’ Rights (ACHPR) DOC.EX.CL/1089(XXXIII) I, at EX.CL/Dec.1015(XXXIII), para. 7(iii). It further asks the ACHPR to submit its criteria on observer status to the States parties for their review and approval, and indicates that those criteria should be the same as the AU’s own, more stringent, requirements for NGO accreditation. See id. at para. 8(iv).

Additional threats to the ACHPR’s independence in this one document include a request that the ACHPR “verify” allegations (of human rights abuses) in its activity reports and a call for the ACHPR to “develop clear guidelines” on its engagement with “external actors.” See id. at para. 8(v), 8(vi).

The ACHPR has not made any public statement on these developments.

Purpose and Importance of Observer Status

Observer status is an official recognition that allows civil society organizations to participate in ACHPR activities and to access the African Court on Human and Peoples’ Rights (AfCHPR), and that is a symbolic importance for recognition and legitimacy.

This status is only available to certain types of organizations and is a prerequisite for some forms of participation in the ACHPR’s activities. For example, observer status is required to make oral statements before the ACHPR during a session and to propose additions to the session agenda. See ACommHPR, Resolution on the Criteria for Granting and Enjoying Observer Status to Non-Governmental Organizations Working in the field of Human and Peoples’ Rights, Resolution 33, 5 May 1999, chapter II, paras. 5-6. Additionally, NGOs with observer status are invited to the opening and closing sessions of all of the ACHPR’s sessions, have access to non-confidential ACHPR documents that deal with issues relevant to the NGO’s interests, and may be invited to be present at closed ACHPR sessions that deal with issues that are of particular interest and may be authorized to make a statement on issues that concern the NGO. See id. at paras. 1(a), 2-4.

Observer status at the ACHPR is required, along with “AU recognition” to bring a case at the AfCHPR. See Protocol to the African Charter on Human and Peoples’ Rights on the Establishment of an African Court on Human and Peoples’ Rights (adopted 9 June 1998, entered into force 25 January 2004), OAU/LEG/EXP/AFCHPR/PROT (III), arts. 5(3), 34(6). Additionally, an organization must be recognized by the AU for the Court to issue an advisory opinion, which prevented the AfCHPR from issuing an advisory opinion that CAL and the Centre for Human Rights requested in 2015. See AfCHPR, The Centre for Human Rights, University of Pretoria (CHR) & The Coalition of African Lesbians (CAL), App. No. 002/2015, Advisory Opinion of 28 September 2017.

On a symbolic level, observer status provides an organization with visibility and legitimacy within the rights community. [Thomson Reuters Foundation] The recognition of CAL and other similar NGOs signified recognition of the rights of women human rights defenders, LGBTI persons, and sex workers. [CAL: Grant]

For more information on the ACHPR and the rights of LGBTI persons, visit IJRC’s Online Resource Hub. IJRC’s manual on the African human rights system, Advocacy before the African Human Rights System (2016), provides greater detail on the mandate and functions of the ACHPR. To stay up-to-date on international human rights law news, visit IJRC’s News Room or subscribe to the IJRC Daily.