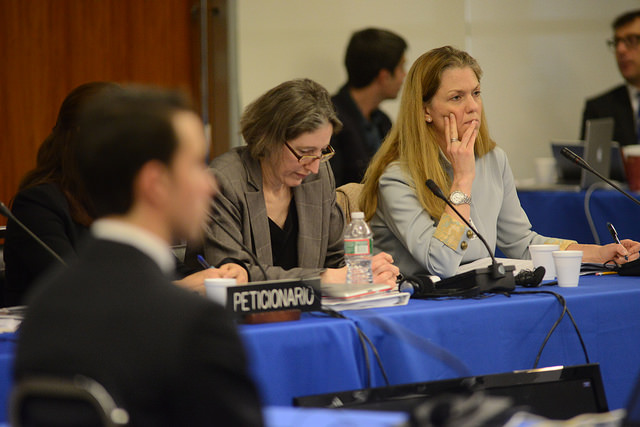 The petitioners’ representatives at the Inter-American Commission
Credit: IACHR

The Inter-American Commission on Human Rights (IACHR) recently released a decision vindicating the rights of two undocumented workers in the United States whose employers denied them medical benefits and wage replacement after they were injured on the job, in a context of domestic jurisprudence and policy limiting labor protections for undocumented migrants. See IACHR, Merits Report No. 50/16, Case 12.834, Undocumented Workers (United States of America), 30 November 2016. The IACHR ultimately found that the U.S. violated the workers’ rights to equality before the law and social security benefits enshrined in the American Declaration of the Rights and Duties of Man (American Declaration). See id. This significant decision is the first to address the employment rights of undocumented migrants in the Americas and builds on the IACHR’s doctrine related to discrimination on the basis of immigration status. It includes a list of recommendations to the U.S. to ensure policies and practices that promote equal treatment and due process for undocumented workers. See id.

The petitioners, Leopoldo Zumaya and Francisco Berumen Lizalde, are both Mexican nationals. Zumaya, who was injured while working as an apple picker in Pennsylvania in 2004, had his medical benefits suspended and was advised to settle his case for substantially below the value of benefits typically provided to workers. In 2005, Berumen Lizalde was injured when working as a painter in Kansas and was subsequently deported for having a false social security number, a process that cut short his medical care and was seemingly set in motion by his employer in retaliation for his filing a claim for workers compensation. See id. at paras. 13-19.

These events occurred a few years after a 2002 U.S. Supreme Court decision, Hoffman Plastic Compounds v. NLRB, which held that an illegally fired undocumented worker could not recover back wages, or those wages that would have been earned had she not been fired. [ACLU Speak Freely] Interpretations of the Hoffman case vary by state, with some states interpreting the precedent to entitle the state to reduce, or remove, labor and employment protections like compensation for workplace injuries. [ACLU Speak Freely] The petitioners alleged that the Hoffman decision introduced immigration status as a relevant factor for workplace rights, and encouraged state claims that undocumented immigrant workers were entitled to fewer legal protections including limiting rights related to the freedom of association, access to compensation for workplace injuries, and freedom from workplace discrimination. See Undocumented Workers (United States of America), 30 November 2016, paras. 2, 11.

Zumaya and Berumen Lizalde’s representatives submitted their petition to the IACHR on November 1, 2006, alleging that they were denied the full protection of their labor and due process rights. See id. The petitioners specifically pointed to the tacit complicity of the U.S. government in creating a chilling effect on workers willingness to pursue litigation in the wake of the Hoffman case, and the intimidation faced by undocumented workers. See id. at para. 12. In 2011, the IACHR published its admissibility report, admitting the petition, but decided to separate these two petitioners’ claims from those of three other undocumented workers whose full names were not identified in the initial petition. It held a public hearing on the merits of the case in March 2015.

The Commission addressed the parties’ arguments concerning the alleged violations of the American Declaration with reference to other international standards. The decision builds on the Inter-American Court of Human Rights’ Advisory Opinion on the Juridical Condition and Rights of Undocumented Migrants, the International Labour Organization’s Note on the Dignity and Rights of Migrant Workers in an Irregular Situation, and statements from United Nations human rights treaty bodies. The Commission made explicit its reliance on interpretations from other human rights systems, stating, “it is necessary to consider the provisions of the American Declaration in the broader context of both the inter-American and international human rights systems” and that its analysis would refer to other human rights instruments that U.S. has ratified. See id. at para. 68.

Right to Equality before the Law

Regarding Article II (equality before the law), the IACHR emphasized the importance of the right of nondiscrimination, and the requirement that any distinction in treatment be based on an objective justification, further a legitimate goal, and be applied through reasonable and proportionate means. See id. at para. 74. While recognizing that the State is not required, under international human rights law, to allow the employment of undocumented workers, the Commission stated that once an employment relationship exists, the prohibition on discrimination applies. See id. at para. 76. This means legal protections must be applied equally to documented and undocumented workers. See id.

The IACHR determined that the petitioners were treated differently from documented workers on account of their immigration status, and that this was also true of other undocumented workers who had pursued claims before state courts. See id. at paras. 77-87. It attributed this difference in treatment to the actions of private employers and government officials, who enforced immigration laws against the petitioners with the effect of terminating their workers compensation claims. See id. at para. 88.

The IACHR found that the discrimination was not based on an objective and reasonable justification and that the State had failed to demonstrate how it took any steps to ensure that the petitioners obtained equal workers compensation benefits. See id. at para. 91. The Commission specifically rejected the State’s argument that allowing discrimination against undocumented workers helped discourage undocumented migrants from working in the U.S. unlawfully. “Rather, the Commission consider[ed] that… requiring employers to provide equal redress to employees, undocumented or otherwise, would do more to achieve this goal.” See id. at note 110. Accordingly, the IACHR concluded that the State had violated the petitioners’ rights under Article II.

With reference to Article XVII (juridical personality), the IACHR reiterated that the American Declaration protects every person’s basic civil rights, including the right to work. See id. at paras. 94-95. It concluded, based on its own doctrine and other international human rights standards, “that undocumented workers should not be denied protection of their human rights by a State on the basis of infractions of immigration regulations.” See id. at para. 97.

The IACHR next turned to Article XVIII (judicial protection), and affirmed that the State must ensure the availability of adequate and effective judicial remedies for violations of fundamental rights. See id. at para. 98. The Commission found that the petitioners’ “serious work-related injuries” impacted their social and economic rights, as well as their right to personal integrity. See id. at para. 104. Because Lizalde’s ability to pursue his workers compensation claim was cut short by his deportation – and because the domestic courts would have allowed him to be denied the same benefits as a documented worker – the Commission determined that he did not have access to an adequate and effective remedy. See id. at paras. 99- 114.

The IACHR did not have sufficient information to find a violation of Zumaya’s right to a remedy, but did conclude that the United States violated Berumen Lizalde’s juridical personality and right to a remedy under articles XVII and XVIII. See id. at paras. 113-114.

Finally, the IACHR analyzed Article XVI, and stated unequivocally that “labor rights are also human rights,” holding that the petitioners were unable to recover full social security benefits and thus that the United States violated their right to social security. See id. at paras. 117-123.

In light of the foregoing, the IACHR concluded that the United States violated the rights of Zumaya and Berumen Lizalde under articles II and XVI of the American Declaration, and also violated Lizalde’s rights under articles XVII and XVIII. See id. at paras. 5, 131.

The IACHR provided a list of recommendations, including that the United States provide the petitioners with adequate monetary compensation; ensure federal and state laws prohibit distinctions in labor rights in employment relationships on immigration status grounds; prohibit questions about immigration status once a worker has complained, or initiated litigation regarding their labor rights; ensure equal rights and remedies for documented and undocumented workers; create a mechanisms through which workers may request suspension of deportation until proceedings are resolved and medical treatment is obtained; improve the discovery of employers who violate labor laws and exploit undocumented workers and impose sanctions against such employers. See id. at paras. 5, 124, 132.

The IACHR adopted its merits report in December 2015 and decided to publish the decision in December 2016, after the U.S. failed to implement its recommendations. The State had responded to the merits report by indicating that the Commission’s recommendations were either already enshrined in domestic law or did not fall within its purview, as matters left to the individual state governments. See id. at paras. 126-27. The U.S. also asserted that it was not required by international law to implement the recommendations, and disagreed that it had violated its international obligations in this case. See id. at para. 128. Whether the State now makes, or facilitates, changes in domestic law and policy in conformity with the decision will likely depend largely on the ongoing efforts of the advocates involved in the case and their allies.

Although the State does not consider the decision legally binding, it has the potential to positively impact the lives of undocumented workers living in the United States. [ACLU Speak Freely] This decision is especially important in light of the reported inconsistent application of state laws on compensation and workers rights, the retaliation faced by workers in the United States, and fear-based under-reporting of abuses, which may be exacerbated under a Trump administration. [ACLU Speak Freely]