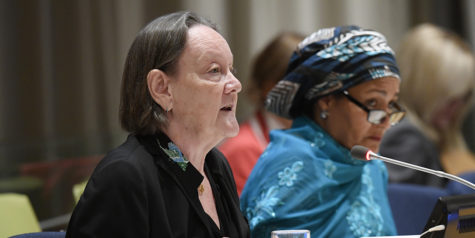 Jane Connors delivers remarks at the high-level meeting on the prevention of sexual exploitation and abuse
Credit: UN Photo/Evan Schneider

The latest report by the United Nations Victims’ Rights Advocate (VRA) reviews the progress made in 2019 to address sexual exploitation and abuse by United Nations personnel, and calls on the international community to dedicate additional resources to supporting and protecting victims and ensuring accountability. [UN News] Jane Connors, the first-ever UN Victims’ Rights Advocate is responsible for strengthening the institutional responses to sexual violence and abuse by peacekeepers and other personnel, and her latest report identifies many developments while calling on the international community to “address the root causes of sexual exploitation and abuse, including gender inequality and the deep power imbalance between [UN] personnel and those whom we are mandated to protect and aid.” See Special measures for protection from sexual exploitation and abuse – Report of the Secretary-General, 17 February 2020, para. 4. Connors mentions particular challenges, including high turnover within the UN, resolving paternity claims, protecting victims’ confidentiality while promoting accountability, providing material assistance to victims, and identifying and addressing sexual exploitation and abuse in the many countries without dedicated UN victims’ rights advocates in the field. See id.

END_OF_DOCUMENT_TOKEN_TO_BE_REPLACED 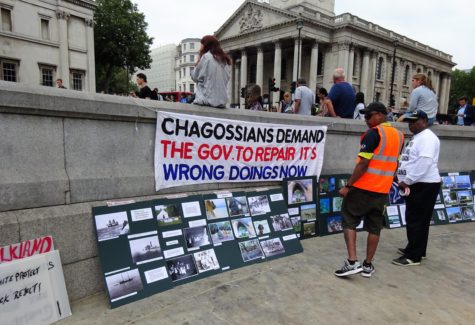 In an advisory opinion issued on February 25, the International Court of Justice (ICJ) concluded that the United Kingdom violated core principles of international law by separating the Chagos Archipelago from Mauritius in the 1960s and continuing to administer the islands as a British territory. See Legal Consequences of the Separation of the Chagos Archipelago from Mauritius in 1965, Advisory Opinion, ICJ Reports 2019, para. 183. Despite the U.K’s numerous attempts to challenge the Court’s jurisdiction over the matter, the Court ultimately determined that it was competent to address the questions presented and issued its answer. See id. In its opinion, the Court made clear that the U.K’s actions with respect to this former colony run counter to what are now well-established rights of peoples to self-determination. See id. at paras. 177-178. The UN General Assembly is expected to discuss implementation of the advisory opinion, including returning the islands to Mauritius and resolving the status of the thousands of people the U.K. forcibly expelled from Chagos following its agreement with the United States to allow an American military base, and later secret CIA detention site, on the island of Diego Garcia. [Guardian; Nation]

END_OF_DOCUMENT_TOKEN_TO_BE_REPLACED 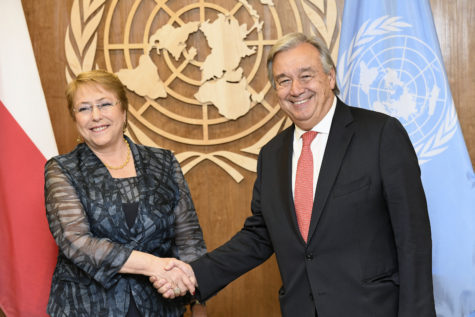 On August 10, 2018, the United Nations General Assembly approved Michelle Bachelet’s nomination for the position of UN High Commissioner for Human Rights. [UN News: Appointment] The General Assembly’s decision followed the UN Secretary General’s announcement on August 8 to nominate Bachelet for the position. [UN News: Nomination] Bachelet will serve a four-year term, beginning on September 1, 2018, with a possibility of renewal for a second four-year term. [UN News: Appointment] Bachelet is replacing Zeid Ra’ad al-Hussein, who began his term as UN High Commissioner in September 2014 and chose not to seek a second four-year term. [UN News: Appointment; NY Times: al-Hussein] Zeid Ra’ad al-Hussein announced last December that he would not seek re-election because of the anticipated lack of support among “key world powers, including the United States, China and Russia.” [Reuters] He also was concerned that a second term would require him to be less outspoken in advocacy efforts and less independent given the current geopolitical climate. [NY Times: al-Hussein]

END_OF_DOCUMENT_TOKEN_TO_BE_REPLACED 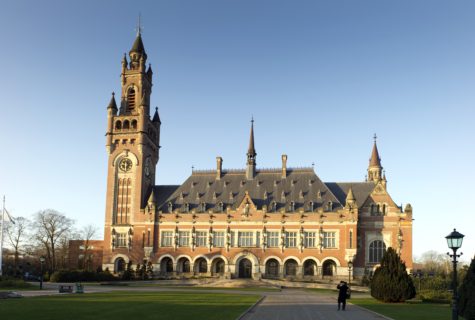 The United Kingdom announced yesterday its withdrawal of its candidate for a spot on the International Court of Justice (ICJ), the principal judicial organ of the United Nations, allowing Judge Dalveer Bhandari of India to be elected as the sole candidate. [UN News Centre] After ten rounds of voting, another round was due to take place yesterday but was canceled following the announcement. [Guardian] Previous rounds of voting had elected four candidates to take four of the five empty seats on the Court, but as of Monday morning the final open seat remained undecided between Judge Dalveer Bhandari of India and Judge Christopher Greenwood of the United Kingdom. [Washington Post] A candidate must secure a majority of votes in both the UN Security Council and the UN General Assembly to win a seat; Judge Bhandari had a majority of votes in the General Assembly, and Judge Greenwood had a majority in the Security Council. [Washington Post] This will be the first time that the United Kingdom is not represented in the composition of the Court. See ICJ, All Members.

The conversation surrounding this election is part of a broader debate on the composition of international courts and whether they are representative of the populations they serve. The GQUAL Campaign has focused on whether courts are representative by gender, and there is increased debate over whether the developing world and Asia are adequately represented on international courts and tribunals. [GQUAL Campaign] One consideration in the election is the tension between the General Assembly and the Security Council, where some members of the General Assembly feel that their voice is not being heard or is being downplayed by the permanent members of the Security Council – China, Russia, United States, United Kingdom, and France. [Times of India; Guardian] Additionally, with Judge Bhandari remaining on the Court, there will be four judges from Asia on the Court, one more than prior to the elections, and one fewer judge representing the western European and other States on the Court. [EJIL: Talk!] See ICJ, All Members. END_OF_DOCUMENT_TOKEN_TO_BE_REPLACED 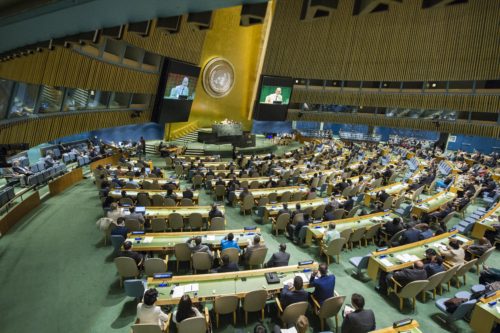 Activities of Supranational Bodies and Courts 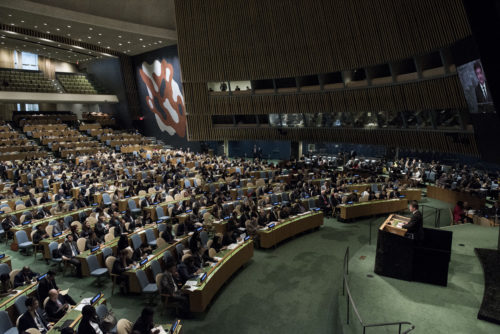 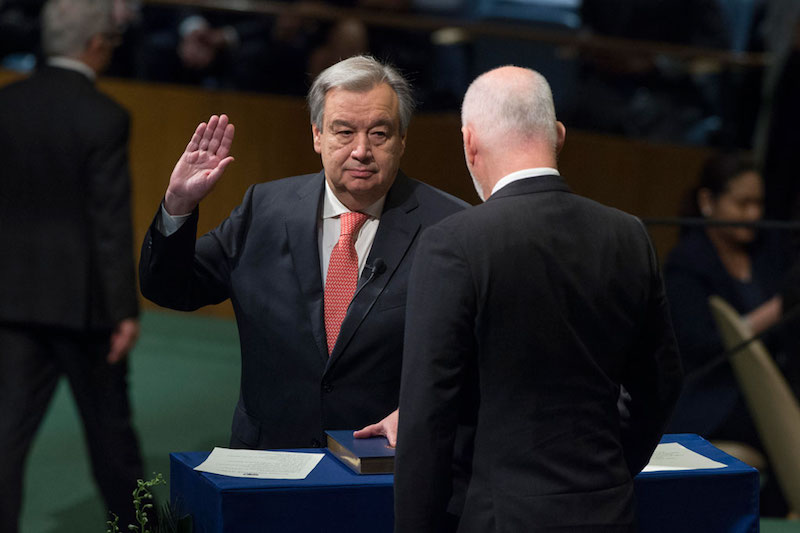 The new United Nations Secretary General, António Guterres, recently appealed to Member States to join him in committing to ensuring and sustaining peace and has further called for a holistic approach to the UN’s work through close coordination between the UN’s three pillars: peace and security, sustainable development, and human rights policies. Guterres, who assumed office on January 1, 2017, replacing Ban Ki-moon, will hold the post for a five-year period, ending December 31, 2021. While only a few days in to his term, Guterres’ initial remarks have shed light on his goals and priorities and include an appeal for peace, a call to the UN to support sustainable development and the Paris Agreement on climate change, and a notice to the UN as an organization to prepare for change in its internal management structure. See United Nations, Secretary-General-designate António Guterres’ remarks to the General Assembly on taking the oath of office. On linking the three pillars, he has said, “there is no peace without development and no development without peace; it is also true that there is no peace and sustainable development without respect for human rights.” [UN News Centre: Photo Feature]

Guterres was chosen for the role after the UN implemented a more transparent selection process, which included dialogues with Member States and civil society. [UN News Centre: Guterres; IJRC] Guterres, who is fluent in Portuguese, English, French, and Spanish, previously served as the 10th UN High Commissioner for Refugees (UNHCR) from June 2005 to December 2015, as Portugal’s Prime Minister from 1995 to 2002, and as president of the European Council in 2000. [UN News Centre: Photo Feature] END_OF_DOCUMENT_TOKEN_TO_BE_REPLACED 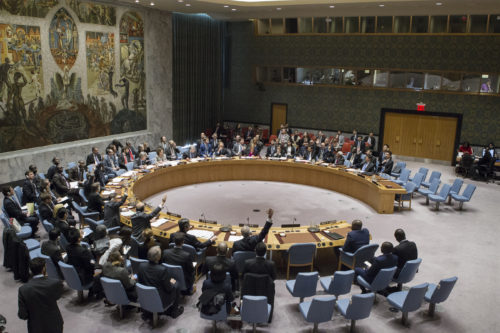 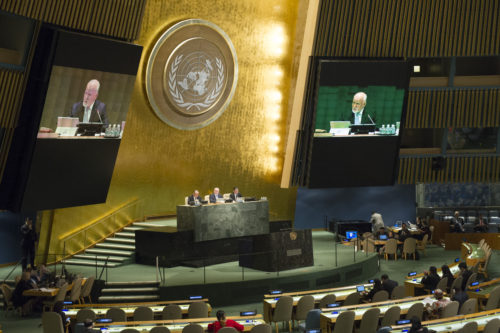 In the month of December, various universal and regional bodies will be in session. Three United Nations treaty bodies will meet to engage with States regarding their treaty obligations related to torture, racial discrimination, and enforced disappearances. Seven UN special rapporteurs and one working group will conduct country visits, and three working groups will meet in Geneva, Switzerland to discuss issues pertaining to people of African descent, the use of mercenaries, and activities of private military and security companies. The 71st regular session of the United Nations General Assembly continues in New York this month, as well.